Concerned Canadians and supporters of the Canada First Immigration Reform Committee demonstrated outside Federal Court in Kitchener at 9:30 a.m., Wednesday, September 2, 1998, to protest the ongoing persecution of 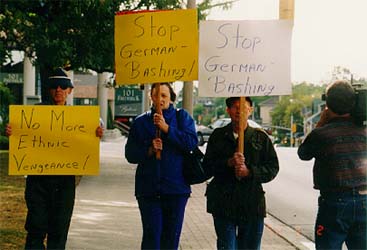 German-Canadian Helmut Oberlander, whom the federal government is trying to strip of his citizenship because he served in the German Army as a 17 year old in World War II. “This case is a travesty,” says Paul Fromm, a Mississauga author and director of the Canada First Immigration Reform Committee. “Here is a man who has been a hardworking and productive businessman. He has been the ideal immigrant. Now, in his old age, the government seeks to deport him under retroactive law.” “Such law flies in the face of our British traditions of fair play and the Anglo-Saxon legal tradition of letting people know the law in advance.” “This war crimes mania, 53 years after the war, is blatant German-bashing,” says Fromm, a fourth generation German Canadian. “Both my parents proudly served in the Canadian Armed Forces in World War II. For them and for most Canadians, the war ended in 1945. Refighting the war is ruining people’s lives and scratching up old animosities,” Fromm charges. “The gutless government has knuckled under to pressure groups that want to extract ethnic vengeance for the hurts of more than half a century ago. That’s not the Canadian way and it’s not fair,” says Fromm. 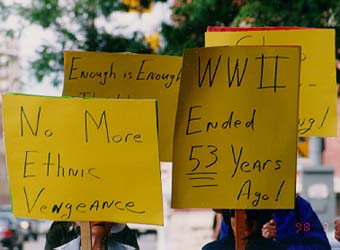 The present campaign to strip a number of German and East European Canadians of their citizenship is “discriminatory”, Fromm charges. The federal Government won’t seek proper compensation from Japan for the 750 remaining Canadian veterans of brutal Japanese slave labour camps, who received $1 per day for their hell. “Yet, the Canadian government is beating up on German and East Europeans who have contributed to Canada and have done no harm to any Canadian.” The government is also “hypocritical”, says Fromm, because, while it continues to hound people who were on the losing side in World War II, it does nothing to try to exclude or deport Russians who may have committed war crimes or crimes against humanity by manning the vast Gulags, the Soviet slave labour camps. “This is a double standard. It’s discriminatory and it’s offensive. Such German and East European-bashing is just not good for ethnic harmony in Canada,” says Fromm. The protest attracted considerable attention from the Kitchener Waterloo Record, and local television (CKOC) and radio. Over a thousands leaflets were distributed. A number of Mr. Oberlander’s supporters blasted the generally timorous leadership of many official German organizations and praised the protest, saying, “It’s long overdue for someone to call a halt to this constant German-bashing.”