Thanksgiving in Canada — What gives?

Most of us will have noticed that Canadian Thanksgiving comes well in advance of our neighbours to the south, and for all the predictable reasons: colder climate, earlier harvest, and that persistant urge to accomplish something (anything) before “they” do. But the history of our Thanksgiving is stuffed with surprises.

We did actually have the FIRST Thanksgiving, a full 43 years before the pilgims at Plymouth Rock, but, in true Canadian fashion, there was something wrong with it. That first North American Thanksgiving would have been “celebrated” in sub-zero temperatures on a barren, windswept moonscape by a muttering, mutinous crowd wondering whether “the chief” had all his marbles.

In 1576, Sir Martin Frobisher set out to find the Spice Islands. He landed instead on Baffin Island. The complete absence of trees and a pitiless terrain of unrelieved rock and permafrost barely dampened his determination to establish the first English settlement in North America. Not yet disabused of his perennial optimism, he spent two years mining “gold ore”. When it was well and duly hauled back to England, it assayed out as iron pyrite. Fool’s Gold.

By 1710 we were back on track with this Thanksgiving thing. Records at Port Royal, Nova Scotia, note an October 10 thanksgiving celebration to mark the return of the town to the English. In 1763, Halifax celebrated the end of the Seven Years War with a similar ceremony.

In 1879, Parliament formally declared November 6 as a day of Thanksgiving, and so it remained until after the Armistice of WWI, when Thanksgiving and Remembrance Day would have conflicted thematically during the same week.

When Thanksgiving was assigned to its present second Monday in October, former Ontario Premier E.C. Drury, head of the United Farmers of Ontario, decried the move as a ploy by city-dwellers to move a farmer’s holiday “up” the calendar so they could enjoy a long weekend while the weather was likely to still be fine (at the farmer’s expense). Canadian – eh? 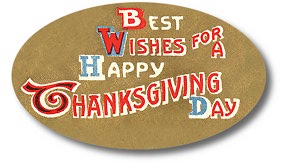