Between The Rock and a Hard Place: The Destruction of Newfoundland’s Outport Communities

On July 1, 1916, at Beaumont-Hamel, on the opening day of the Battle of the Somme, no unit suffered greater losses than that of the Royal Newfoundland Regiment. Afterwards, the Divisional Commander said an odd thing: “It was a magnificent display of trained and disciplined valour, and its assault failed of success because dead men can advance no further.” Of the eight hundred and one men to face that hell on earth, just 68 answered roll-call next morning. If anything, the remainder of the century would treat Newfoundlanders with less courtesy.

Proudly calling itself “Britain’s Oldest Colony,” Newfoundland’s semi-autonomous status was ordained by King Henry VII’s letters patent to John Cabot. The Cod-fishing grounds of the Grand Banks were a known and jealously-guarded secret among a few close-mouthed Basque, Irish, and Viking fishermen — but the immediate effect of Cabot’s 1497 voyage was to spread the word: In the New World there were fish to be had in such unimaginable profusion a man might almost walk upon them! In his 1620 “Brief Discourse of the Newfoundland,” Englishman John Mason remarked, “Cods so thicke by the shoare that we heardlie haue beene able to row a Boate through them.” It is impossible to overemphasize the historical significance of the Codfish. Called the “Faithful Friend” by the Portuguese, this boneless, skinless staple would not only sustain Catholic Europe over centuries of Lenten seasons and meatless Fridays, it alone kept far-flung colonies (including slave colonies) Cod Fishery closed.

But Cod don’t vote. On April 17, a scant 10 days before the 1997 federal election call, Liberal Fisheries Minister Fred Mifflin announced that 6,000 tonnes of Cod might now be taken from the northern Gulf of St. Lawrence and off the west coast of Newfoundland, and 10,000 tonnes from the southern Newfoundland coast! And Atlantic voters fell in line. Such games — with Cod and fishermen serving as pawns — have prompted scientists to call for “a complete separation of science and government” (an odd spin on science as secular religion). One scientist said: “Irrespective of whether or not cod should be fished, this process stinks.” The September, 1999 Marshall decision by the Supreme Court has only exacerbated fishy politics, putting large numbers of native fishermen on the water, in season and out. In PEI, the Department of Fisheries is actually buying back non-native licences to present to native band councils. The current Fisheries Minister, Herb Dhaliwal, a Sikh, brings to the embattled fisheries department a wealth of experience — in the taxi industry. But worse, after fifty years of stupendously poor management, the Canadian fishery is not even about fish anymore — it’s about native land claims. It might have all been so 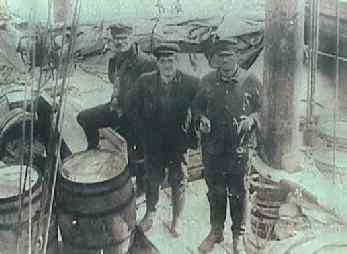 different had Canada chased off foreign interlopers in timely fashion and resisted the urge to underwrite our own giant masticating factory trawlers, but managing the world’s biggest Cod fishery was a complex and subtle affair. As always in Canada, it is meddling and social engineering that puts a spring in the bureaucratic step. In the end it would not be the foreign fishing fleets that were “dealt with,” but local fishermen.

Joey Smallwood swore he would “drag Newfoundlanders kicking and screaming into the twentieth century.” And, in a bitterly ironic way, that’s just what he did. The last Father of Confederation’s solution? In a word — resettlement.

In 1949, a bare half of all Newfoundlanders enjoyed electrical services. As far back as 1933, the Amulree Commission noted that Newfoundland, “has always been, first, and foremost, a fishing country; the settlements are, therefore, situated in places from which fishing could most easily be conducted. The original settlers, in making their homes, paid little attention to what they considered relatively unimportant factors; such as, … the lack of amenities.” Well, if it was inconvenient to bring utilities to the outport residents, why not bring outport residents to the utilities? Better yet, why not put modernized filleting, freezing and cold-storage fish-processing industries at the hub and heart of these progressive centralized “growth centres”? After all, despite the many warning signs, the fish would always be there, wouldn’t they? Under federal and provincial auspices, three major resettlement programmes took place between 1953 and 1975. 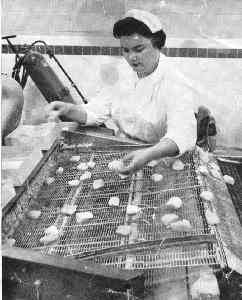 Sorting scallops, 1965
The first most outport people heard about the scheme was when Smallwood made a public announcement that hundreds of small communities and thousands of people could expect to be affected by “centralization”. Stalinist implications aside, it’s almost impossible to imagine the havoc such an announcement would wreak on small, insular communities: all the old enmities would be revived as rumours flew that this one or that had made application for relocation. New enmities would percolate as the most ambitious prevailed upon his neighbours to sign up. Adult children and their parents might well find themselves on different sides of the dispute, thanks to differing compensation schemes. Additional pressures were brought to bear once it was known that a certain proportion of the community had to agree to move or all would “lose out”. After all, the province had said it could not guarantee medical, educational, or utility services to hold-outs. Hadn’t Smallwood said he was discontinuing coastal ferry, postal, and freight services? There were rumours too, that government agents would be sent out to see to it that 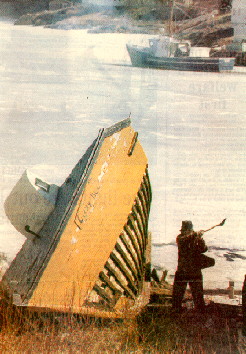 there was nothing left to return to. No one knew whether or not his particular community was on the block, but underlying it all was the heartbreaking prospect of leaving your centuries-old home place — the font of your earliest memories, — and abandoning the graves of your forefathers to the whistling winds.

It is a mark of just how impoverished the outport communities were to think that between 1953 and 1965 alone, 110 outport settlements vanished utterly, the residents given the pitiful sum of just $150 from welfare services to pull up stakes. Clearances in all but name, sudden demand drove up housing prices in the new “growth centres” and one study estimated it would take the displaced a minimum of 20 years to replace all that had been left behind. The sight of a house being towed across the bay was commonplace throughout the resettlement years. No one seemed unduly concerned that poorly educated fishermen might not be able to compete in urban areas where unemployment rates already averaged 20 per cent — or that fishing grounds around settled areas were reserved for long-time residents, not penurious newcomers. Even the much-loathed merchants lost out: not only did their customers vanish overnight, there was no compensation plan for shops, stores, wharves or sheds. Under a final scheme, the householder’s pay-off reached a magnanimous $1,000 (plus $200 per household member), but under this disposition, government officials would dictate where the newly-homeless would be permitted to settle. In other words, the household would only receive assistance if and when they agreed to move to a region approved by a committee of federal and provincial bureaucrats. Between 1965 and 1972, 3,876 households and 19,197 persons were “evacuated”. More and more, federal health dollars were dedicated to addressing “lifestyle problems” associated with the relocations. 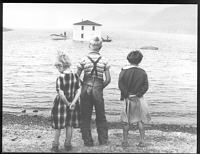 Towing a house, Bonavista Bay, 1961
“They cheat us and rob us and continue to say, that our only salvation is leaving the Bay.” – Joe Byrne

Predictably, no good came of the massive uprooting of the outport people. The centralized fish processing industry would die with the Cod. Subsequent polling found that in some cases, no single member of a dispersed community was willing to admit that he or she had ever wanted to move. Those who went willingly felt they had been seduced with false promises, while the remainder continued to feel they had been pressured and driven out. Some Canadians now regard Newfoundland as a fiscal sinkhole of doomed regional development schemes — but honestly — is that attributable to some previously unseen innate Newfie sloth and profligacy, or the congenital genius of the federal-provincial decision-making mob? For too many, resettlement was just a first step on the way to leaving Newfoundland for good. Faithful to some few traditions at least, the latest (2000) election had the Liberal Party talking about a limited Cod fishery in the near future, despite the fact that Cod stocks are showing absolutely no sign of recovery. And Atlantic voters fell in line. Through it all, Newfoundlanders endure with characteristic good grace, good humour, and, as always, ever more out-migrations. From the highest in the land, Newfoundland’s birthrate today is even lower than that of its old rival, Quebec (the other lowest birth rate in the country). 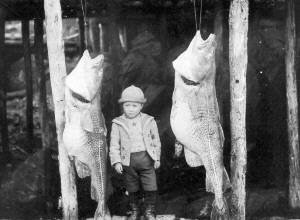 Newfoundland Child with Cod
For some peculiar reason known best to themselves, federal politicians prefer to reserve their gushing sympathy and generous funding for the ubiquitous Third World refugee. As we’re told, “shattered lives” and “displaced people” are defined as — and ONLY as — UN Convention refugees. Too many well-meaning Canadians would seem to agree, viewing the Third World refugee as an inherently noble, suffering protagonist. In contrast, the ill-used Newfie, after generations of battling the vicissitudes of the Atlantic, is relegated to the butt of jokes as the eternal simpleton and clod. Outside Newfoundland, the deportation of the Acadians and the internment of the Japanese excites much disapproval, but in terms of forced population movements, these pale beside the destruction of the outport communities. The same thing was done to traditional Eskimo settlements, and with the same result: traditional life-styles do not survive population centralization.

Just why the Liberal Party wants all Canadians to feel ashamed about the treatment of all minority groups — past and present — is mysterious enough. Why we must at the same time, remain indifferent to the shabby treatment of one of our oldest distinct resident groups is a certifiable imponderable. For some perverse reason, we just don’t care that these programmes eliminated 300 traditional Newfoundland communities, (about a quarter of the whole). So what if resettlement finally affected 30,00 to 40,000 Canadians? So what if more than 40,000 Atlantic Canadians lost their livelihood when the Cod moratorium was imposed? Perhaps Atlantic and B.C. fishermen are too busy trying to find work elsewhere to ask Ottawa for their very own “family reunification” plan. What matter if Newfoundlanders were displaced and remain uniquely disadvantaged by the bargain they made with “The Canadian Wolf”? And if Ottawa mismanaged the Cod out of existence in fewer than 50 years, who really cares? Certainly not the UN: did they censure Canada, as when illegal Chinese boatpeople were “forced” to wear prison garb of supposedly ill-omened colour? It’s easier to import votes than to restock desertified oceans. The shameful lesson of the demolition of the outports is not much taught outside of Newfoundland — for once the resettlement programme had come under a cloud, it was allowed to die in peaceable disgrace and no official statistics have ever been published.

Her face turns to Britain, her back to the Gulf. Come near at peril Canadian wolf. – Anti Confederate Toast

If you read the sundering of Newfoundland as a metaphor (or blueprint) for the ecological and cultural destruction of Canada as a whole, it only proves that — when we really apply ourselves — we can overcome almost any natural advantage.

Deemed to be one of the three best movies of all time, How Green was My Valley laments the passing of another traditional way of life — that of a Welsh mining family. It was not the sea that provided for their wants — but that passing was at least noted. Like the peal of church bells from the bottom of a lake — listen: “I can close my eyes on my Valley as it is today — and it is gone — and I see it as it was when I was a boy. Green it was, and possessed of the plenty of the earth …” 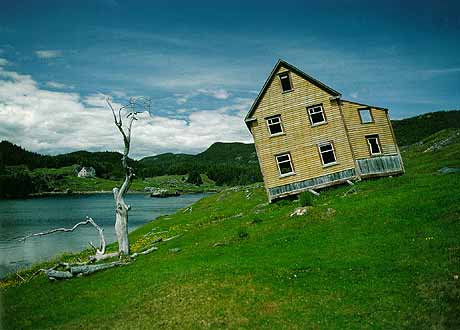