1535, THE FIRST CHRISTMAS IN CANADA

The first Christmas observed in Canada, that of 1535, was kept — but scarcely enjoyed — by one hundred and ten souls in a tiny palisaded fortress on the banks of the Ste. Croix River (now the St. Charles), near the present City of Quebec. On the site of the latter was then the Indian Village of Stadacona.

Jacques Carier and his advance guard of settlers were by Christmas time beginning the struggle with the terrible hardships which during the winter beset the little band, killed twenty-five of its members, and reduced the remainder to a state of helplessness for many weeks.

The French ships had come bravely up the river during the previous summer, and had been joyously welcomed by the Indians, who were well supplied with gifts by the newcomers. The Isle of Bacchus (the Island of Orleans) and the land on either side of the great river of Canada had been explored, and a plot of land at the mouth of the Ste. Croix Croix had been selected as the most suitable location for winter settlement. Jacques Cartier had made his way up as far as Hochelaga, and had returned to his band in time to over-see the final preparations for the cold weather. 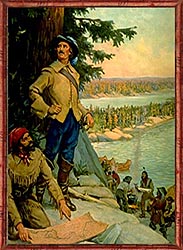 It became noticable before winter set in that there was a change of attitude on the part of the Indians. Outwardly they were friendly, but the Frenchmen soon became convinced that the two guides, whom they had carried off to France on a previous expedition and had brought back to serve as interpreters, were sowing disaffection among the people of Stadacona. Their influence on Chief Donnacona was marked, and the settlers took as their mottos thenceforward, “He who is watchful loses nothing.”

By the end of November the ships were frozen in and the little colony was beginning to discover the weak points in the winter preparations. The buildings could not keep out the penetrating cold. There were no cellars in which to keep supplies. All the drinkables were frozen hard, and melted snow had to be used for water, as rivers and streams were soon locked fast by the ice. Salt meat and stale vegetables formed the greater part of the diet, and by Christmas time health was beginning to suffer and the first whisper of the dread disease of scurvy was apparent among the whites. 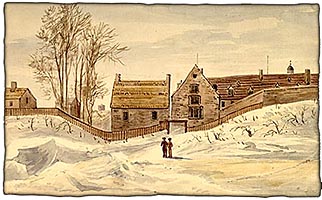 The Indians hovered round, always watching. Sometimes they came to visit the settlement, and often they tried to entice the whites to visit their village on one pretext or another. There were ceremonious protestations of friendship on both sides, but the French were always conscious of the silent and observant movements of the natives. They, therefore, determined, above all, no matter how sick they were, to maintain a show of activity and strength about the fortress, lest, tempted by the obvious weakness of the garrison, the Indians should decide to attack it.

Christmas in those circumstances couldn’t be a very merry affair. It came, however, before the worst of the winter trials, while the settlers were still buoyed up by the hope of future discoveries and by the tales of Donnacona — a man of some imagination, apparently — who told them of precious stones and metals to be found in lands beyond the country of Saguenay; of white men dressed in cloth like themselves who inhabited a region near a great inland sea of fresh water; of lands of luxurious vegetation south of the Great River, where other red-skinned people lived; and of a mysterious race of one-legged people living in some ill-defined territory far from the district known as Canada. All these things interested the adventurers mightily, and imagination, combined with a taste of the most precious of their food supplies, probably helped to make Christmas Day a little more cheerful than those which had preceded it. It was certainly far more cheerful than many which followed it, for there came a time when all but ten of the party were near death from scurvy. Courageous hearts alone enabled the little colony to hold out until the spring, and to deceive the Indians into thinking the band strong and prepared for attack in the days when they were threatened with utter extermination. – Montreal Star