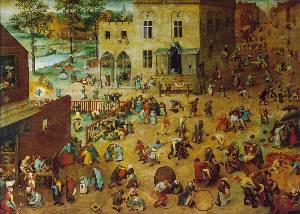 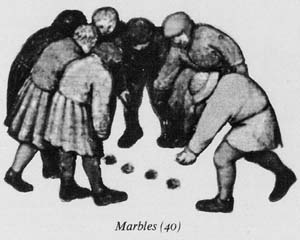 We’ve been hearing it for 30 years now: “Canada has no history — has no culture”. Noticing that the government says so while it floods the nation with people who could hardly be more culturally dissimilar, is considered not quite nice of us.. Not quite cricket and all that. After all, somebody has to observe the rules of decency, why not the patsy footing the bill? Given the fact that in its Greek origins, historia meant inquiry – our “lack” of history looks even more ominous.

But consider: in Bruegel’s 1560 painting, Flemish children disport themselves in scores of games that are readily indentifiable to us — more than 400 years later. How can it be? Canada has never had a very significant Flemish population, so how do we recognize the familiar games, unless (heaven forfend!) we’ve inherited a pan-European culture? On the other hand, who ever teaches these games to children? Could it be (even worse) genetic? Who 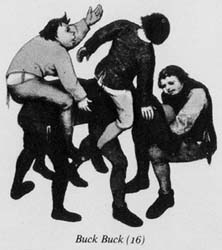 knows? These small people have always rushed in and out of adult homes intent on some project of great moment, too preoccupied to stop and explain. But the dreadful evidence is here before your wondering eyes — 250 children engage in eerily familiar play. In the deep-rooted cultural enclave that is European children’s play, 440 years doesn’t seem to make much of a difference. The girls playing dolls may be wearing caps and wimples, the leapfrogging boys may be wearing miniature codpieces, the boys treating their friend to a case of “the bumps” may be wearing smocks, but the chain of juvenile fun is unbroken. Some games, like playing dolls and making mudpies, are probably universal. But what about the group in the right hand foreground? One boy sits on a beam to act as “pillow”, while two others make “backs”, while another two ride them.

In the game, one of the “riders” holds up a hand and the “horse” must guess which hand, or how many fingers he holds up. The game is well-known in France, Germany, Scandinavia, Spain, Russia, and the English-speaking countries. Petronius Arbiter described it in his “Satyricon”, the boy holding up a hand cried out: “Bucca, bucca, quot sunt hic?” Even the name of the game, buck-buck, survives from the time of Nero. Two girls, in the extreme upper left have their skirts billowing out around them, “making cheeses” — a recognizably European icon if ever there was one – as is the Jack-o’-lantern in the window. 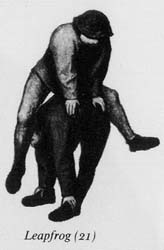 Unlike their parents, children have the inherently good sense to reject laws and rules in which they have no say. A nice, healthy trait. It’s incredible to think that Canadian parents are hurrying little Brittany or Dylan into over-sized gansta’-style hair shirts, ready and waiting for them to “grow into”.

Hurry! Oh hurry! Tell your kids that they are descended, not from an infinite line of innovators, achievers, scientists, explorers, builders, civilizers — and documenters (like Bruegel) but from liars, cheats, slaveholders and rapists. Tell them that they desperately need a real culture, a real heritage, a real religion, they need therapy, they need enrichment. Plug them into a vacuous “hand-held” games and plop them in front of a tv, and let them bask in the rich cultural glow. When you do, don’t be too surprised when little Brittany or Dylan grows up to fulfill your every expectation as a body-pierced space cadet or slovenly, rap-talking gangsta wannabe. LINKS: Ancient and antique games (many Norse) Short essay on Bruegel – fine images