Tom Bethel, himself an Englishman, has defined the “English disease” as being ever eager to demonstrate how good a fellow you are by never really taking anything too seriously.

But surely this diagnosis is even truer of Canada, where anti-patriotism is the patriotism of the intellectuals, where to celebrate this country’s history, tradition and culture, or even to defend its national sovereignty, is to invite, at best, sneering condescension, and at worst, accusations of hate-mongering.

The spontaneous popular outrage that has met the three (or is it four?) boatloads of Chinese migrants caught Canada’s elite off guard. A tempest in a teapot: these little people, these “whiners” would cease their caterwauling soon enough.

But when it became evident that the anti-migrant sentiment might force a change in immigration policy, our guardians changed tack. A scapegoat was demanded. The real villain of this saga, we are now told, is not Elinor Caplan and certainly not the migrants or the “snakeheads” that brought them here. It is a certain Paul Fromm of Rexdale, Ont., director of the Canada First Immigration Reform Committee.

On August 15 the front page of the Victoria Times Colonist was dominated by a photograph of Chinese migrant held in detention at CFB Esquimalt. The headline: “Go home.” A subhead explained, “We asked you to have your say about the latest wave of migrants to reach our shores. Your response was huge, the message was clear: Send them back immediately. YES 3362. NO 105.”

In case the message had not been driven home, the first line of the story read, “Go home. By plane. By boat. Just go.” An editorial three days later was headlined, “Canadian anger over migrants is not racism,” and compared the migrant landings to a military invasion.

Shortly thereafter the Times Colonist started having second thoughts. An August 31 editorial, “Restoring faith in system,” declared, “The main problem with Canada’s refugee system isn’t the refugees.” The landings had been downgraded from an invasion to a mere abuse of process.

By the next day, the Times Colonist had completed its 180-degree turn. “Far-right stokes refugee fears,” the newspaper editorialized. The popular reaction to the migrant crisis was now deemed “overwrought.” The newspaper mocked, “What do we do? Turn the boats back to sea? Mine the western approaches? Shoot the migrants? Give them bus tickets to Seattle? Declare war on China?”

Perhaps the Times Colonist had ventured into the fever swamps of the Internet. For it is there, you see, that “groups like the Canada First Immigration Reform Committee are taking valid questions and concerns about immigration policy and dragging them across the line, using them to legitimize weak-minded xenophobia, pandering to our basest emotions and fears.”

How to explain the Times Colonist’s Orwellian transformation from tribune of the people to scourge of demagogues? Only a cynic would suggest a telephone call from Southam headquarters in Toronto.

And only a suggest would suspect that the two-minute hate being directed at Mr. Fromm is an organized campaign. The Ottawa Citizen reports August 21 that two NDP MPs have asked the solicitor general to “investigate” Mr. Fromm, citing his alleged ties to the long-defunct Heritage Front.

We learn in an August 30 Globe and Mail story by John Gray, “Far right using Web to whip up hostility to Chinese migrants,” that Mr. Fromm’s petition to deport the migrants is supported by white supremacists Terry Long, Wolfgang Droege and Gerry Lincoln. (One gets the impression that only death prevented Adolf Hitler, Martin Bormann and Heinrich Himmler from adding their names to the list.) Mr. Fromm is revealed as a supporter of the “free speech” (sarcastic quotation marks in the original) rights of the sinister Doug Collins.

Messrs. Long, Droege and Lincoln make another cameo appearance in a September 2 column by the Vancouver Sun’s Ian Mulgrew, who demands an end to the immigration debate and its “excitable rhetoric,” “thinly veiled bigotry” and “over-blown hyperbole.” Excitement, after all, is so very un-Canadian.

NO ENEMIES TO THE LEFT

Canada’s “far right” comprises perhaps 50 people, of whom 40 are probably CSIS provocateurs. Nonetheless, to link any political opinion to this shadowy cabal is to destroy its legitimacy, “extremist” being an epithet even more powerful than “nigger.” Mr. Gray, however, sees nothing wrong in using Harry Abrams to blacken Mr. Fromm’s name.

Mr. Abrams is described as “the B.C. representative of B’nai Brith, who has tracked the recent anti-immigrant campaign.” He has also, as this column revealed, published an account of his campaign against Doug Collins in the Communist journal Outlook. Sure, the Communists killed 150 million people, but nobody ever accused them of being anything less than “progressive.” 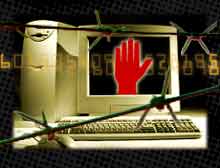 Those Canadians still inclined to think for themselves can access Mr. Fromm’s website at canadafirst.cdmail.biz. Just be careful who’s looking over your shoulder.