“What recently happened to its director, Paul Fromm, is typical of what happens when a Canadian takes a stance against immigration/refugee practices.” –Diane Francis Aug 24, National Post

Diane Francis was just talking about Paul Fromm being treated bad by reporters. I wonder what she will say now about this:

“New Democrat Peter Mancini is asking Canada’s solicitor general to consider laying hate crime charges against the people behind the web page. The site is the product of a group calling itself the Canada First Immigration Reform Committee.” -CBC Aug 24, 1999 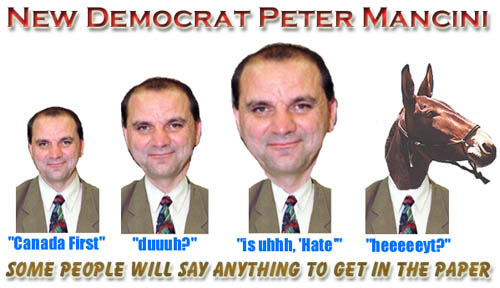 Cape Breton MP condemns web site as hate crime CBC Newsworld | Aug 24 1999 SYDNEY – A Cape Breton member of Parliament is worried about an internet web site that claims immigration can kill you. New Democrat Peter Mancini is asking Canada’s solicitor general to consider laying hate crime charges against the people behind the web page. The site is the product of a group calling itself the Canada First Immigration Reform Committee. “There’s a banner in bold, blood dripping letters that says immigration can kill you. [It says] whites will be a minority in Canadian cities.” It displays a banner dripping with blood claiming immigration can kill you. Another message blames immigrants for crime. [lie???] Mancini says this shows that poor people, visible minorities or foreigners “are not welcome in this country because of their ethnic background.” [Boy, what a nut] He wants the federal solicitor general to look into this site. The MP and long-time criminal lawyer thinks it may be breaking the country’s hate law. An official with the solicitor general’s office says Mancini’s concerns have been passed on to the RCMP.
Also see Ottawa Citizen Article “Group fuels racism, MPs say”

THEY’RE TRYING TO SILENCE THE PROTEST.

THEY’RE SHOOTING THE MESSENGER FOR WARNING OF THE DANGERS

THEY’RE TRYING TO INTIMIDATE US

But CFIRC will *NOT* be intimidated by anyone much less an NDP has been from Nova Scotia. We have just announced a new revolutionary ePOSTCARD which, directly from our site will get directly sent to all immigration critics as well as to the Minister for Immigration. And we have dozens of projects on the table, just waiting.

STAY TUNED WITH CFIRC – WE ARE NOT GOING ANYWHERE!

Letter from CFIRC Director to Peter “The Censor” Mancini:

We note your complaints about our website to various authorities and your efforts to have us charged and silenced. 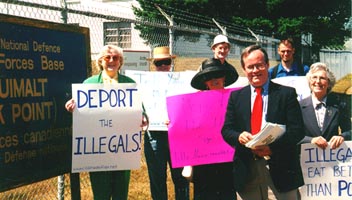 Why don’t you READ what’s on the site? Immigration — at least poorly screened immigrants — CAN kill you and your family. READ what we’ve written about the lethal effects of tuberculosis, AIDS, and hepatitis. Are you really in favour of keeping Canadians ignorant and of stifling debate as is done in such “socialist” paradises as Cuba and Red China?

As well as complain and call for censorship, I trust you can count. What part of 90% don’t you understand? That, according to Diane Francis, is the number of Canadians who back deporting the latest two invasion boats of Chinese illegals. Our own study of polls find her comments convincing: 85% of those responding to a C-FAX poll in Victoria felt the same way. If your party truly is “democratic” why don’t you get on side and back the majority, instead of trying to shoot the messenger?

Mr. Mancini, censorship and thought control didn’t work in the old USSR. They will not work here. Those of us who believe in an open debate among free men and women look at you thought-control wannabees slowly sinking into the ashcan of history.

Why not try freedom?

Write to Peter Mancini and DEMAND to know why questioning of the immigration fiasco should be illegal.