The Canada First Immigration Reform Committee is starting a postcard campaign for immigration reform! We have already distributed thousands of postcards all over Canada for people to fill in and send to the Immigration Minister, Elinor Caplan complaining about this governments absurd and shameful policies on immigration. We have now set up our website to accept online postcards, that will be automatically FAXed to Elinor Caplan’s office.

Or you can select one of our premade cards, print it out and send it in yourself, or print one off for a friend to send in!

Read our August 27, 1999 Press Release on the ePOSTCARD
Please fill out our online postcard, and we will send it for you!

Which Graphic to use on front side (Click on graphic to Enlarge)? 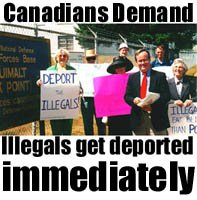 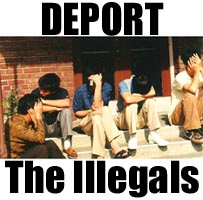 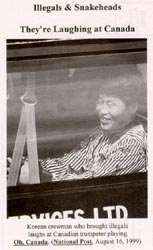 Select text to attach on back part of postcard:

Canada has lost control of its borders. I urge you to use the “notwithstanding” clause to overturn the 1985 Supreme Court “Singh” Decision. From now on, the only people to be considered for immigrant or refugee status are those who apply and are vetted from abroad. Stop the illegals!

According to the National Post of August 24, 1999, over 90% of Canadians want the two boatloads of illegal aliens from China to be sent back immediately. We demand you respect the wishes of the majority of Canadians! And ship them back now!

Enough is Enough. We need to get control back of our borders. I urge you to immediately enact legislation to stop the invasion of Canada by illegal immigrants!

With such high unemployment and thousands of Canadians on welfare, I demand that the Canadian government put a halt on immigration immediately! We need to take care of our own citizens first!

Or put in your own text:

Fill In Your Information
All information posted below will only be seen by the Canadian Minister for Immigration and various immigration critics for all major political parties in Canada. This information will *NOT* be posted in any public space, or anywhere on our website. If you have further privacy concerns, please see our printable card section, and simply print out a card and mail it in at your leisure.
.Name:
Address – Line 1: Address – Line 2: Town: ….Province: ….Postal Code: Name of your Member of Parliament: Electronic Signature:Do you want to receive information in the mail from CFIRC: Yes | No