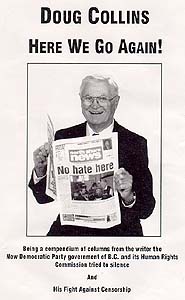 Doug “The Devil” Collins is alive and in your face and set to open the bomb-bay doors on another incendiary load of dangerous opinion.

You can’t keep a good ink-stained wretch down, I guess — even after he has been dragged before the BC Press Council, prodded and poked by the BC Human Rights brigade and vilified by every left-leaning fanatic and soft-handed media type across the land. No, sir.

This Collins guy has an external coating of something they don’t make anymore. Heavy-duty rhino hide, perhaps, something impervious to the buckshot and shrapnel of the mudslinging trade. His latest project to poke sticks at the status quo and frighten the children is another compilation of his North Shore News columns. His first collection, the Best and Worst

of Doug Collins, was published in 1987 by North Vancouver’s Whitecap Books. It was a hardcover grenade lobbed into the complacent soft-centre of Canadiana.

Best and Worst columns gathered from the Collins 1984 to 1987 News era bore such headers as: Let’s all get AIDS; Blockheads and Blowhards; the Ministry for Turban Affairs; and Women and Weeping. Best not to read the foregoing aloud.

The human rights police might be listening. The initial print run of 8,000 hardcover copies sold out in short order — a tribute to the salability of tough love Collins style. It also confirmed the solidarity of the Collins following — the same following that helped contribute so generously to the North Shore News’ free speech defence fund and helped, the News and Collins in the ongoing battle against government-backed thought and opinion suppression.

The latest Collins book, Here We Go Again!, will have a more modest launch and an initial print run of 2,000. No publisher either. Collins has chosen to self-publish his latest project. The vanity press is an expensive gamble at the best of times. It is also in many cases the last resort of the frustrated author who might have more money than talent. But that’s not the case with Collins.

The Best and Worst was Collins’ third book. It was preceded by P.O.W, a chronicle of the columnist’s Second World War experiences, which was published in 1968; and Immigration, The Destruction of English Canada, which was published in 1979. So a publisher for another Collins venture would likely not have been be too hard to find. But, aside from its many drawbacks, self-publishing also cuts out the timorous middle man in the equation, which in Collins’ case might be worth the gamble. For Doug the Devil, the decision was his way of ensuring that the book was an uncensored and uncompromised dose of the Collins brand of free speech.

Here We Go Again! contains 100 Collins columns from his latter News period, which ended in September 1997, when he retired from the newspaper after 13 years and close to1,500 columns. Included in the latest collection is the notorious $200,000 Hollywood Propaganda rocket that launched the 1997 Human Rights Tribunal hearing involving Collins, the News and the Canadian Jewish Congress.

Also in the package are the three other columns included along with Hollywood Propaganda in a subsequent human rights complaint lodged by Harry Abrams. The columns are grouped under such like-minded sections as Me, The Human Rights Gestapo, and the Media; Immigration: the Deaf Leading the Blind; Humor is as Humor Does; and Phony Rights and Real Wrongs. Individual column headings include: All alone on the rights griddle; Massacred by the media; Thought police on patrol; Rot about the right; Pokenoses and pressure groups; Hell is here to stay; News flash! Daily press discovers free speech; and A redneck to the rescue. Here We Go Again! indeed. The Collins execution squad will doubtless be readying its pack of victims to be re-offended. In the best of Collins traditions, the book represents an emphatic middle finger salute to that squad and anyone else easily brought to tears. The book, says he, is “an act of defiance against the censors. “I think this is a valuable part of journalistic history. The North Shore News and I are the first anywhere in North America to be hauled before a human rights tribunal over the expression of an opinion.

We are fighting a heresy law. The public should be able to see what it is all about. This book will do that.” Here We Go Again! is currently in the hands of the printer, but should be ready for sale by next week. It will not be sold in book stores. As the late great [Judge] Les Bewley wrote in his Best and Worst of Doug Collins foreword: “the Best and Worst of Doug Collins is a strong fresh breeze in an age where common sense and courage are frowned upon. His worst is better than most others’ best.” It remains thus. Copies will instead be available through the mail.

Send a cheque or money order to

Copies are $15.95 each, including tax. Add in $3 per copy for postage and packaging.