Skip to content
He thought he saw a Banker’s Clerk Descending from the ‘bus:
He looked again, and found it was A Hippopotamus. ‘If this should stay to dine,’ he said,
‘There won’t be much for us!’
Lewis Carroll, Sylvie and Bruno

Each and every year, Canada takes in 1/4 million people – roughly one per cent of the Canadian population. That’s more than twice as many immigrants per capita than either the US or Australia accept.

Our intake rate is the highest in the world. 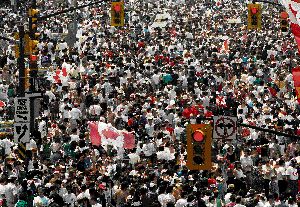 80 Million versus 1/4 million? That’s an underwhelming 1/320th of the net global “gain” each and every year.

The 1/4 million Canada accepts can never make any difference to the 99.9% of people condemned to stay in a Third World robbed of ‘skilled class immigrants’.

The UN High Commission for Refugees identifies 27 million people worldwide who are “of concern” to them — in 1998, Canada will accept between 24 and 32 thousand of these. The 1/4 million immigrants and refugees Canada accepts are an infinistesimal drop from the global population bucket. However, for Canada, it is an ANNUAL flood that is changing Canada as surely — and just as radically as an armed invasion would.