The first meeting of the Canada First Immigration Reform Committee in Halifax, held on Saturday afternoon, was invaded by about 30 members of the anarchist terrorist group known as Anti-Racist Action (ARA).

The raid occurred well before the meeting was to start when just a few early attendees were present.

The ARA shouted threats at attendees: “Come outside. We’re going to kill you.” “Nazis out.” The police did nothing to lay charges for intimidation.  ARA punks monitored all the exits to the hotel. 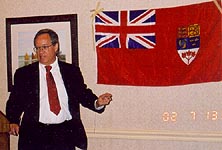 Not deterred by the terrorists, Paul Fromm gives a rousing

Inside the hall, eager hands picked up the scattered books and literature. The meeting started on time at 2:00 p.m. before a full house and Paul Fromm, the Director of the Canada First Immigration Reform Committee (CF IRC) received a standing ovation for his expose of the lies and myths of Canada’s immigration policy, a policy that seeks to replace the European settlers of this once great Dominion with a more easily managed Third World population.

The RCMP grandly indicated that they were with the National Security Service, the Mountie spooks or intelligence arm. They knew of the approaching ARA demonstrators and apparently did not inform the local police. After the ARA invasion, Clarke told Paul Fromm: “We’re just here to observe. We can’t interfere. It’s up to the city police.”

When challenged further, Clarke asked Fromm what he [Clarke] and the other officer could have done against the crowd.

One wonders whether law enforcement now depends on the police outnumbering the protesters. What was all that Mountie training in crowd control and confronting criminals for? The two officers were seen speaking on a number of occasions in the hotel lobby with one who appeared to be an ARA leader.

After the Meeting,  Paul Fromm and Marc Lemire attacked in full view of RCMP Officer,  who did … nothing!

The ARA harassed some of those leaving the meeting, chasing and hurling objects at a car carrying Paul Fromm and CFIRC webmaster Marc Lemire. The protesters shrieked “Die, fucking Nazi!“ 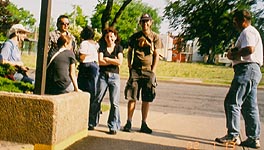 After driving out the parking garage of the Holiday Inn, six members of Anti-Racist Action wait in front of the hotel.  Upon spotting us,  they run at the car, shrieking death threats and throwing objects at the car.

Of special note to the picture above.  In the white shirt on the right hand side,  is the RCMP officer with his digital camera.  He witnessed the attack on us and did nothing.  The evidence piles up that the RCMP seem to be supportive of terrorists.

Later that night,  the ARA sits in wait to attempt to ambush Fromm and Lemire

Once we spotted the car following us,  while we were parked outside the hotel,  a girl in the backseat signalled then via her cell phone.  The ambush group ran from around the back of the hotel, screaming death threats and trying to attack people in our car.  One of the thugs kicked the back of the car creating a large dent in the car.

Denise Allen was quoted heavily in the newspaper.

[Full Article] [Our Reply to Article] 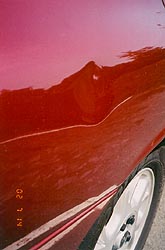 Yes, this is a story of predictable ARA thuggery. This group of establishment coddled terrorists is an ongoing menace to freedom of speech in Canada.

Worse, though, this is a story of RCMP ineptitude, indifference or collusion with the ARA terrorists. The RCMP clearly knew the thugs were coming and that there would be a confrontation. They did nothing to prevent it. When the invasion occurred, they stepped aside and let numerous violations of the Criminal Code occur. These are the facts.

Is there more to it? There may well be. It’s worth considering whether the RCMP were in active league with the ARA. They knew they were coming, but did nothing to prevent a breach of the peace. From the point of view of the highly politicized RCMP, it might serve the government’s purposes to have immigration reform meetings smashed by the street terrorists.

If this seems a bit conspiratorial or far-fetched, we must remember the ignominious role of CSIS agent Grant Bristow in the funding and formation of the Heritage Front. The HF started out as a peaceful White rights group. Bristow, a government agent and informant, persistently pushed them in the direction of violence and confrontation – exactly the behaviors a frightened establishment would like to pin on its populist opponents. Bristow, a government agent, repeatedly urged the HF to break the law.

The RCMP behavior, whatever its motives, was a disgrace. The officers failed to prevent a breach of the peace. They failed to uphold the law. They seemed more interested in photographically intimidating the attendees at a lawful peaceful meeting than in stopping the perpetrators of violence.

We urge you to complain about the behavior of these officers to: