Speaker after speaker at as June 5-6, semi-annual meeting of the Council of Conservative Citizens (CoCC) sounded the alarm: America is being invaded and immigration reform in needed now! The Council under the direction of St. Louis lawyer Gordon Lee Baum is America’s foremost populist organization. A special panel, chaired by broadcaster and author Louis Tuttle March, focused on immigration. March, co-author

of The Great Betrayal: The Elite’s War on Middle America, declared: “I look upon myself as being a friend of the American workingman, the man who works for a living. The policy of free trade and its twin uncontrolled immigration are wiping out the American workingman. It’s all about greed. We already have too much unskilled labour. This is already the best place in the world to run a scam and to go on welfare.” As Canadian civil libertarians and defenders of free speech like Doug Christie and Paul Fromm have noted, the immigration invasion has led to a serious curtailing of the right to speak as an ever more desperate elite seeks to gag discussion of and dissent from the unpopular immigration policies they’ve imposed. “One of the downsides” of this mass immigration, March added, “is speech codes. You can’t offend more and more categories of people. You’re free to speak, but not to speak freely.” Jared Taylor, author of Paved With Good Intentions: The Failure of Race Relations in Contemporary America, said: “There are only two questions: Does America need more people and, if so, what kind of people?” The publisher of the monthly journal American Renaissance, then asked: “When was the last time you drove down the highway and said: ‘I haven’t been in a traffic jam in the last 15 minutes; we need more people?

Did you think back to that little town you grew up in and say: ‘We didn’t have any Mexicans or Guatemalans or Haitians; how poor we were?” Taylor explained that 90 per cent of the more than 1 millions immigrants each year are now non-white. “In 1900, the U.S. was less than 1 per cent Hispanic. Very soon, there will be more Hispanics than blacks.” 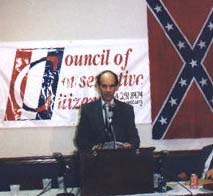 Taylor warned of the dangers posed by Mexican hopes to seize parts of the Southwest through immigration — a plan called “la reconquista”. Mexico, he explained, “recently changed its citizenship laws so that Mexicans can become American citizens.

The very explicit purpose is for loyal Mexicans to vote in U.S. elections and further Mexico’s political interests.” Taylor cited a number of spokesmen who have been blunt in their hostility toward White Americans. Art Torres, the Chairman of the California Democratic Party, said: “Remember Proposition 187 is the last gasp of White America. Understand that.” Torres, said Taylor, “is an open Mexican nationalist looking forward to the day when Whites become a minority.” Another ominous voice quoted by Taylor is Mike Hernandes, a Los Angeles city councillor, who said: “We are Mexicans. We are the future. We will lead this country.” “Demography is destiny,” Taylor warned. “These people understand there’s a fight going on. How do we react? We talk of celebrating diversity! For the past few decades, we’ve operated a system where they get preferences the minute they cross the border. Just this week, the federal government ordered the State of Alabama to give a test for her driver’s licence in Spanish to a woman who couldn’t speak English.” In a fiery conclusion, Taylor asked: “What do you call those who says we should be glad to be displaced? Traitors! We must do everything in our power to remove these traitors!” Dr. Brent Nelson of the University of Arkansas told the largely Southern audience: “Northern Virginia, Florida and South Texas are now outside the Anglo-Celtic circle and are being lost of Dixie to Third World immigrants.” The author of America Balkanized charged: “Big business favours mass immigration to keep wages down and to keep the Ponzi game on Wall Street going.

“Our biggest enemy is no longer the left,” the spellbinding professor warned. “It is rootless, cosmopolitan transnational capitalism. Too many local business people are ready to take the greedy grab today and ignore the consequences tomorrow.

Labour is being imported into the U.S. just as if it were another commodity. We’re being destroyed. It’s being done to us by the plain selfish greed of the ruling elite of this country.” The goal of this elite, Professor Nelson explained, “is to transform themselves from the leaders of a republic into the leaders of a multinational state, a North American Brazil, rulers of a terrorized, ignorant proletariat living barely above survival levels.” The bitter reality, Dr. Nelson observed, is that the elite intends “to displace our people through massive immigration from the Third World. We need a complete moratorium on immigration. Continued mass immigration will destroy Dixie.” Switching to electoral politics, Dr. Nelson noted that the Republican Party won the presidency and won control of the Congress only because they carried the South. “They carried the South only because they carried the Anglo-Celtic core of Dixie.”

We must “quit feeding the hand that slaps us,” Dr. Brent urged. “It’s safe to say none of the Republican candidates for Congress will talk of a moratorium on immigration. We can simply refuse to vote for Republicans and vote for independents, instead.” Dr. Wayne Lutton, co-author of the best seller The Immigration Invasion, noted that as this century opened, the world had 1.6-billion people. As it closes, the population has swollen beyond 6 billion. “Only four countries today allow large scale immigration: the U.S., Canada, Australia and New Zealand. All four countries were previously successful British countries,” he noted. “It says something that British outposts of civilization are the targets of immigration and are allowing themselves to be transformed by people who are not their own.” Dr. Lutton pointed to Malaysian Prime Minister Mahathir who said: “Third World nations should swamp Europe and America, if we are going to be global citizens.” 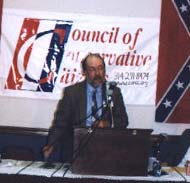 “He was declaring demographic warfare,” Dr. Lutton insisted. “The 1965 Immigration Act should be referred to at the 1965 Treason Act, which abolished controls over the national origins” of immigrants. “The U.S. has actively supported majority rule in South Africa, but do you see the president or the politicians in either party saying we should have Majority rule for the U.S.? Every public opinion polls shows the Majority is with us.” Citing a recent Roper Poll, Lutton noted that 83 per cent favoured lower immigration levels; 70 per cent wanted fewer than 300,000 immigrants annually, The poll found that 73 per cent of blacks, 66 per cent of liberals, 72 per cent of Democrats and 70 per cent of Republicans favoured lower immigration levels. Pentagon officials, he revealed, “were opposed to the idea of sending troops to the border as it would take away from their other responsibilities.

We have troops in many foreign countries, defending the borders of South Korea and Macedonia, for instance. If it’s not their duty to defend our border, what are they there for?” Dr. Lutton demanded. “Demographics is destiny. To populate is to govern,” Lutton warned. “There is a sense that when immigration reaches a certain critical mass in a given community, it is no longer the melting pot transforming them, but they transforming their communities.” Not on the panel, but also addressing immigration in his remarks later that afternoon was Atlanta attorney Sam Dickson. “We face the colonization of our country. It will be turned into a Brazil,” he warned.

He predicted “the breaking of the blue collar worker and the Middle Class.” The immigration debate, he charged, “is being choked off not by Angela Davis but by the phoney conservatives, the neo-cons, those warmed over liberals. These are the people who fired the person — Peter Brimelow — who wrote the pieces critical of immigration for National Review. ” 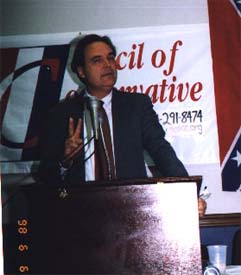 “The litmus test,” Dickson argued, “is where do the politicians stand on immigration and race. If we lose and we cease to exist, the new Mexican majority will not preserve our Confederate flag or our Confederate monuments because our people will be gone. I’m a true reactionary Tory. We must preserve our people first and foremost. The most critical thing to preserve is the genetic basis of our race,” Dickson concluded.