Proceed straight to end and add your comments!

See what others have already said!

Letter to National Post RE: Singh Decision and illegials

Stay up to date – The Chinese Illegals -Updated Daily!

Canada’s unelected, unvetted Supreme Court of radical social activists is out of control. Most recently, in a July 9, 1999 decision the court unanimously decided to reverse a deportation order against Mavis Baker. This Jamaican illegal had entered Canada on a visitor’s permit in 1981. She overstayed her permit by years. Already having mothered and left behind four children in Jamaica, she bore four more in Canada. In 1992, this domestic worker and single mother was diagnosed as a paranoid schizophrenic and applied for welfare. Even the normally lackadaisical officials at Immigration Canada belatedly decided to take action. In ordering Mavis Baker’s deportation, the department noted: She is “a paranoid schizophrenic and on welfare. She has no qualifications other than as a domestic. She has FOUR CHILDREN IN JAMAICA AND ANOTHER FOUR BORN HERE. She will, of course, be a tremendous strain on our social welfare system for [probably] the rest of her life.”

In reversing the deportation order, the Supreme Court, in a judgement written by outspoken radical feminist Claire L’Heureux-Dube, stated: “Because they necessarily relate to people of diverse backgrounds from different cultures, races and continents, immigration decisions demand sensitivity and understanding by those making them. They demand a recognition of diversity, and understanding of others and an openness to difference. … I conclude that because the reasons for this decision do not indicate that it was made in a manner which was alive, attentive, or sensitive to the interests of Ms Baker’s children … [it] must, therefore, be overturned.” Needless to say, social engineer L’Heureux-Dube felt no need to be “alive, attentive, or sensitive” to the hard-pressed Canadian taxpayers who must bear the burden of this mentally ill illegal and her brood.

All of which fails to explain why it is incumbent on the hard-pressed Canadian taxpayer to be “alive, attentive or sensitive to the interests” of Miss Baker’s children — a concern she appears not to share. Of course, with the assistance of a legal aid immigration lawyer, Miss Baker presumably will be able to reunite herfar-flung offspring (and their families, if any) under the provisions of Canada’s family reunificarion plan. 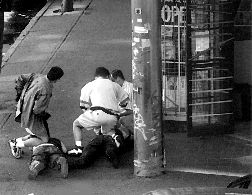 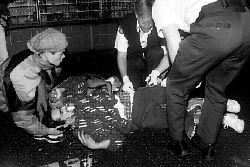 Gang wars, murders and stabbings. Thanks to Immigration

In a startling interview with the National Post (July 12, 1999) Supreme Court Chief Justice Antonio Lamer reflected the arrogance of this unelected group of tyrants. “‘Thank God we’re here. It’s not for me to criticize legislators, but if they choose not to legislate, that’s their doing.’ … Court critics say the judges always rule in favour of aboriginal rights, gay rights and women’s rights judge Lamer counters that the nine judges are just keeping in sync with society.” Yet, almost immediately, he admitted the Court dabbles in social engineering in direct opposition to the will of the Canadian Majority. “Then, he said there are times they have to make unpopular decisions simply because it’s the right thing to do. ‘I’d be concerned if we weren’t,’ he said. ‘It might be a sign we’re putting our nose in the wind and saying, <What’s the popular thing; let’s do it.'”

We, the undersigned, demand that Parliament invoke the “notwithstanding” provision of the Constitution to override the Supreme Court’s 1987 Singh decision, which requires Canada give an oral hearing to any person, no matter how bogus, who says the magic words: “I’m a refugee.” This has allowed tens of thousands of persons to enter Canada, collect welfare, commit crimes, consume medicare/denticare services, and legal aid. Recently, hundreds of Honduran criminals and desperadoes have entered Canada, made their “refugee” claim and then proceeded with fellow “refugee” claimants as young a 10 to peddle lethal drugs on the streets of Vancouver. We demand that the only persons to be considered for entry to Canada are those immigrant applicants or refugee applicants who apply abroad. As well, we demand that Parliament invoke the “notwithstanding clause” to overturn the recent Supreme Court decision reversing the deportation order against a Jamaican illegal who is a schizophrenic and a serious burden on Canada’s welfare system.

Your comments on Immigration:

If nothing happens in 10 seconds, click the STOP button on Netscape and re-try