In October, 1988, if the print and electronic media are to be believed, Canadians underwent a collective cardiac arrest over revelations about sprinter Ben Johnson’s misbehaviour with steroids. Johnson, a Jamaican immigrant, apparently of sub-normal intelligence, is another in a series of media-created Canadian heroes.

Artificial heroes for an artificial country. In the past several years, Terry Fox, Steve Fonyo and Rick Hansen have hopped and wheeled their way across Canada and the world. They were young men of courage and dedication, but not, in the final analysis, heroes. 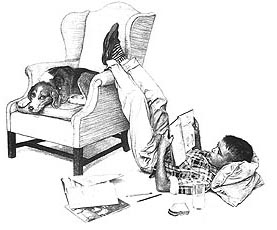 When I was a young boy, I lived in a working class section of Vancouver. There were 36 other kids on my street. Every one of those kids had a mom and dad, and everyone of those dads had a job. It always seemed to be late spring.

The grass was always green and the air was full of cartwheeling swallows and fat, furry bees. God was in Heaven. Good King George was on the throne, and every morning before class, the boys and girls of miss Sullivan’s class at Sir Alexander Mackenzie Elementary school would ask God to save him.

Like all boys, I had my heroes: Brock, Wolfe, Montcalm, and Laura Secord. I also had a special hero, and at night, with Brick, the cat curled up at the foot of my bunk, I would open up the battered old primer that my aunt had given me, and read once again of the stand of Adam Dollard, Sieur des Ormeaux and his companions at the Long Sault. 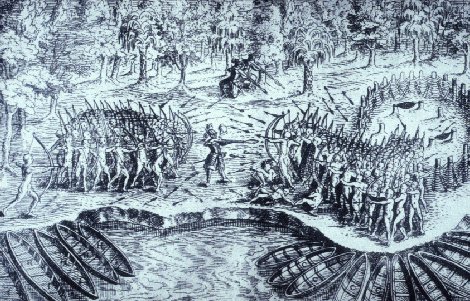 Of the first (1609) battle against the Iroquois, Champlain had written: “I was very glad to show them, as soon as the engagement began, the courage and readiness which were in me.” (The Voyages, 1613)

In the spring of 1660, the colony of New France was faced with a desperate situation. Two large concentrations of Iroquois warriors had gathered. One, consisting of several hundred braves, had congregated on the upper Ottawa River; while a force of 800 warriors was assembling at the mouth of the Richelieu. It was learned from informants that the two parties planned to unite and then attack first Montreal, then Three Rivers, and finally Quebec City.

Adam Dollard was a 25-year-old professional soldier who had been in the colony for three years. He approached the governor of New France, Paul de Chomedey, Sieur de Maisonneuve, in Montreal. Dollard proposed that he, along with a small force of volunteers, could set up a defensive position in the hope of preventing a junction of the two Iroquois bands. He wanted to make his stand near the rapids of Chute a Blondeau, where the Ottawa and St. Lawrence Rivers converge – – a place called the Long Sault. 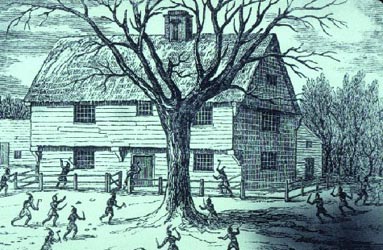 Maisonneuve assented to Dollard’s request, and Dollard started to gather recruits. By the end of April, 1660, 16 men had come forward. They were all young men of humble station: discharged soldiers, farmers and artisans. The oldest was 30. Almost all the rest were in their early 20’s.

They all had mothers, fathers, brothers, sisters, and sweethearts in the three settlements, and ,if their desperate efforts failed, they would all die — either by musket and tomahawk in the burning villages, or by barbarous torture after capture. The task of Dollard and his companions was to die so that the people that they loved could live. With no doubt in their minds as to their fate, the 17 young men confessed, made their wills, and received the last sacrament in the stone chapel of the Hotel-Dieu.

As late as 1692, 14-year-old Marie-Madeleine de Vercheres with only five companions defended her father’s home for two days against marauding Iroquois until help arrived

After two weeks of arduous travel, Dollard and his men reached the Long Sault. A short distance form the Ottawa, on the Eastern side of the Sault, Dollard found an abandoned stockade, but for some reason, he and his men dawdled instead of repairing the stockade and provisioning it with food and water.

Dollard was joined by a party of 40 Hurons under their chief, Anahotaha, as well as by four Algonquins. After two days, scouts at the head of the Sault spotted two Iroquois canoes coming towards the stockade.

The Frenchmen and their allies ambushed the canoes but one brave escaped to warn the main party. Forty or fifty canoes soon landed, and the Iroquois warriors immediately rushed the stockade. Dollard and his men fired volley after volley into them and they broke. A second attack was launched, this time from all sides. When it and a third attack failed, the Iroquois retreated and held a council of war.

During the last desperate days with Lalemant & Brebeuf, when a tribesman urged the Huron to flee the approaching Iroquois, Annaohata said: “What? Could we ever abandon these two good Fathers, who for us have exposed their lives?” (III p. 129) Taken captive during the interminable torture and cannibalization of the Christian fathers (LXVIIILXX pp. 25-31), Annaotaha would escape and fight beside Dollard. (See quotes — Jesuit Relations: http://vc.lemoyne.edu/relations/relations_34.html

Inside the stockade, the 22 men stood by their loopholes and waited. Dollard and his companions were stupefied from lack of sleep. Water and food, like hope, had long since vanished. Escape or rescue was impossible All they could do was to buy some time to save their families.

On the fifth day, more than 500 warriors from the Richelieu arrived, and now over 700 hundred Iroquois faced Dollard. For three days, the Iroquois prepared for the final assault, keeping up a day-and-night harassment against Dollard’s little band. 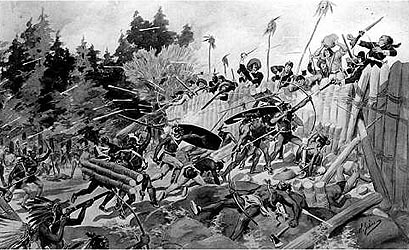 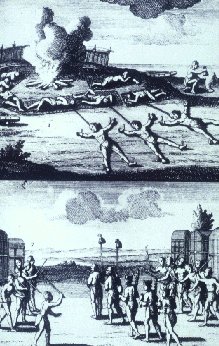 On the morning of the fourth day, the assault was delivered from all quarters, spearheaded by volunteers carrying torches and crude shields. The attack was beaten back. A second assault reached the barricades, and the braves started to set fire to the stockade. In desperation, Dollard tried to toss a hand-made grenade filled with musket balls and gunpowder over the stockade into the midst of the attackers.

The grenade struck the top of the barricade and fell back into the stockade. It exploded killing several of the defenders and blinding others. In the following confusion, the Iroquois gained the barricade. In hand-to-hand fighting, Dollard and all of his men were soon cut down. The epic of the Long Sault was over.

The Iroquois returned to their own territories. They reasoned that, if Dollard and his few followers could cause them so much trouble at the Long Sault, an attack on Montreal would be far too costly.

From the register of Montréal in 1660: the account of Dollard Des Ormeaux and his companions’ death at the Long-Sault. Dollard’s real name was Adam Daulat

You will look in vain for the name of Adam Dollard in today’s school texts or books of reference. It is doubtful if one Canadian school child in a hundred is familiar with his name. Dollard, the saviour of New France, rates one-ninth of a page in “nationalist” publisher Mel Hurtig’s three volume, 200,000-page, Canadian Encyclopaedia..One day in February of 1952, the boys and girls of Sir Alexander MacKenzie were assembled in the schools small auditorium. There, our principal, old Mr.

Woodcock, informed us that King George VI had died. “God,” he said with a voice quavering with emotion, “wanted this man, and so he took him.” Arlene Bird was crying. Sandra MacDonald was crying. Jimmy Brydon started to cry, then I started to cry.I went back to my old neighbourhood a couple of years ago.

Everything seemed smaller and shabbier on the street that I lived on as a boy. And dark and alien faces peered at me as I walked past my old school.There have been a great number of changes in Canada since 1952, few of them, in my opinion, for the good. Old symbols have been cast down, and old values ridiculed. We are ruled by the fool and the knave, and the wishes of the descendants to the people who created this country are studiously ignored.Western civilization, in this dark hour of its existence, needs to be inspired by the exploits of its heroes.

Rather than looking to media-created athletes and androgynous rock stars as examples for emulation, we must look back to our glorious history and gain inspiration from men of the West who spent their lives without question or regret, so that their people would survive: Men like Leonidas and his Spartans at Thermopylae; Travis, Crockett and the men of Tennessee and Texas at the Alamo; Kurt Meyer and his handful of teenagers at Caen; and the stand of Dollard and his companions at the Long Sault. — Robert Jarvis

[Robert Jarvis is a prolific historian and author of The Workingman’s Revolt: The Vancouver Asiatic Exclusion Rally of 1907; The “Kamagata Maru” Incident:A Canadian Immigration Battle Revisited; and Belize: Anatomy of a Multicultural Society in C-FAR’s Canadian Issues Series.

At the Long Sault: May 1660 – Archiblad Lampman, 1943http://genweb.net/~captivity/ During the French and Indian Wars, New Englanders saw Canada as a source of terror (plus ca change…) Indian raiding parties held captives ransom in Canada. A popular song of Colonial America was: “As sure as eggs are bakin’, I’ll go to Canada, and won’t return Till Canada is taken.” 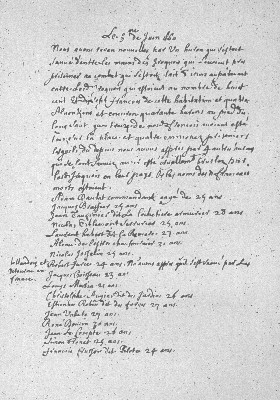 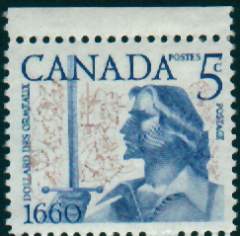