It’s being sold to the developed nations, especially Europe and Canada, that, due to an ageing population, they must be prepared to accept hordes of Third World immigrants. “Essentially, psychologically, we [and the Japanese] are being prepared to accept being replaced,” says Paul Fromm, Director of the Canada First Immigration Reform Committee.

. The report is called Replacement Migration: Is it A Solution to the Declining and Ageing Population? The argument is that with declining birthrates, we face an ageing population. “This argument is utterly bogus and is being used to soften us up for massive population shifts that will be engineered, as part of a New World Order, to replace the present Majority,” Fromm charges.

“No, the direction, we’re being led in is to accept the invasion,” he concludes.

“It’s not really that our population is greying, but that one section of the world has failed to be sexually responsible and has an exploding population,” says Fromm.

“In the 70s and 80s, we and the rest of the West and Japan did the sexually responsible thing for an overcrowded planet. We curtailed our births, while much of the Third World continued to procreate beyond their resources,” says Fromm

“Now,” he adds, “we’re being told that to make up for our ageing population, we must be replaced by the overflow from the irresponsible nations. This suggestion is insulting to our honour, destructive of our national sovereignty, and nothing less than a blueprint for our genocide (replacement) on the instalment plan,” Fromm charges. 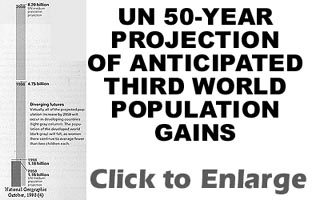 According to the National Post (March 22, 2000): “The population is expected to fall from 57-million to 41-million, if current trends continue. In the most radical scenario, Italy would have to import 2.2-million immigrants every year to maintain today’s ratio of working people to retired people. By 2050, 79% of its expected population of 153 million would be immigrants who had arrived after 1995, or their descendants.”

“Quite clearly,” comments Fromm, “Italy would no longer be Italian. The immigrants, almost all from the Third World, would have made people of Italian stock a tiny minority in their own land. Notice, too, that Italy’s population will nearly have tripled. Overcrowding and degradation of resources would make this land, no longer Italian, a cesspool.”

“Italians seem more alert to the danger of their replacement through immigration genocide than our conformist, intellectually bankrupt New World elite,” Fromm charges. The Italian press, led by the respected La Repubblica, have denounced these proposals have denounced these proposals with headlines like, “Italians on the road to extinction.” (National Post, January 7, 2000)

“There’s nothing wrong with a slightly declining population,” Fromm contends. “Look at our disappearing farmland and the hopelessly congested roads around immigrant magnets like Toronto and Vancouver,” he adds.

The fact that what the news stories have neglected to mention is that the report seems to indicate that (love us or hate us) one segment of the human population — us, people of European descent — appears to be in danger of disappearing.

Like it or not, Japan, South Korea and Europe are facing shrinking populations and a tight labour market that could force them to lower immigration barriers, UN demographers report. Despite anti-immigrant rhetoric and restrictions on migration in many countries, a United Nations study released yesterday shows an ageing population and a low birth rate in most industrial nations over the next 50 years.

In varying degrees, the decline in fertility means swollen ranks of pensioners, with an ever-smaller workforce to support them.

To keep their economies running at about the same pace as today, these nations must either raise the retirement age to well over 70, cut pensions and social services for the aged or open their doors to migrants, skilled and unskilled.

“Governments are going to have to look at these numbers,” UN Population Division director Joseph Chamie said.

“These are cold, sobering statistics. There is nothing political about them.

“People have become accustomed to certain benefits and lifestyles.

“The sooner they address these issues, the easier the problem will be.”

The report, the preliminary findings of which were released in January, analyses in detail demographic trends in Britain, France, Germany, Italy, Japan, Russia and South Korea.

In comparison, the United States, with about 1.1 million immigrants a year, has a more balanced population structure that may prevent a decline in the ratio of working-age people to retirees over the next 50 years.

Spain leads the world’s ageing population with an anticipated 43 per cent of its population over 60 by the year 2050.