The government has a serious problem with the truth in these matters. Thus,their estimate is to be treated as a minimal figure.

It’s clear Mrs. Caplan’s recent visit to Red China to urge people not to come here illegally was a laughable failure. She attracted little media and was received by officials so low on the communist totem pole they scarcely wore sandals.

The only message the snakeheads and their government protectors and quarterbacks will understand is a clear promise that ALL who enter illegally will be jailed and deported. There will be NO chance of a “refugee” claim. To do this, however, Elinor “Fling Open the Doors” Caplan will have to introduce legislation using the “notwithstanding” clause to overturn the Supreme Court’s ridiculous 1995 Singh Decision.

The news item reproduced below demonstrates that the RCMP’s resources are already stretched to the breaking point.

Why should we hjave to guard and coddle and process another flotilla of invaders? They should be apprehended and swiftly deported. To do that legislation must decree that ONLY those who apply and are vetted abroad will be considered for immigrant or refugee status.

C-News Wednesday, May. 03, 2000 | http://www.canoe.ca/CNEWSTopNews/rcmp_may3.html By TERRI THEODORE– The Canadian Press 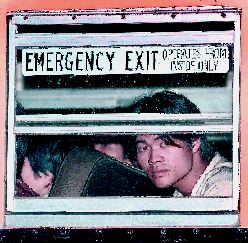 ANCOUVER (CP) — The RCMP are flatly refusing to guard any new migrants that might come to British Columbia on leaky ships this year after the expensive effort drained the force’s coffers last year.

But it’s unclear who will do the job in the force’s place.

Officials with the Immigration Department say talks are still going on with the RCMP, although force officials say they won’t do it.

The RCMP in British Columbia has been stretched to its limit and has even been forced to close its files on some commercial crime investigations.

Meanwhile, it’s expected another 1,200 migrants will come by boat to British Columbia this year, double the number that arrived during last July and August.

Cpl. Grant Learned said the RCMP served written notice to Citizenship and Immigration in February, saying the force “would no longer be able to provide those services.

Senior officers reiterated that position in meetings this week.

“We stepped into the breach last year,” Learned said.

“That came at a tremendous cost in terms of our manpower and our resources.”

Learned said it’s still the RCMP’s responsibility to secure any ships that may arrive and to look for evidence of human smuggling. Officers would also investigate criminal activity.

But guarding migrants while they are in detention after they arrive is the responsibility of Citizenship and Immigration, Learned said.

“The RCMP have responsibility for security and safety issues,” said Lois Reimer, a department spokeswoman.

“We don’t. But of course, that’s not to say that we don’t work closely with them.”

Jim Redmond, the department’s point man on the migrant issue, insisted “the RCMP are still in the picture” and the force and his department are still in discussions.

Privately, RCMP officials are even more blunt than Learned in saying there is little chance the force will give in. One said RCMP brass are “as flexible as a brick wall” on the matter.

RCMP have not provided an estimate of how much the arrival of the four migrant ships cost the force last year other than to describe the expense as considerable.

More than 50 staff, a police boat and crew, an emergency response team and two police helicopters were involved. Many of the costs were billed to the Immigration Department.

RCMP staff levels in British Columbia are down by about 400 members. The problem is most acute in the Greater Vancouver area, particularly Surrey, Richmond and Burnaby.

Last fall, the force temporarily grounded its airplanes, tied up its boat and put a cap on overtime due to an $8.5-million deficit.

In October, the RCMP said it was closing its files on dozens of complaints of commercial crime.

“We have been, for some time, dealing with a resource crisis with the RCMP,” Learned said.

The officers who worked when the migrant ships arrived last year volunteered to come in on their days off to guard the migrants detained while awaiting interviews with Immigration officials.

The hefty overtime cheques were welcome, but Learned said it meant some officers were essentially working two jobs and that wasn’t healthy professionally or personally.

Learned said there is nothing to indicate a migrant ship is nearing British Columbia’s shores soon, so there is time to work out the question of who will guard the next batch of migrants.

But nothing is in place as of now.

Reimer said options are being examined, including the possibility of using commissionaires to guard new arrivals.

She said the military has been ruled out as a solution, but could not say why.

“We are considering all of our options with regard to guarding,” said Reimer. “It’s just we don’t have answers right now.

“The bottom line is Canadians should rest assured that we will have guarding in place should be get more migrants.”