Multiculturalism and the Future of America: “Bitter Bread And Wine”

Speakers on the opening panel of the Council of Conservative Citizens semi-annual meeting in Fairfax, Virginia grappled with the problem of multiculturalism in an increasingly diverse and fractious America, where even once remote areas of rural Virginia swarm with newcomers from Mexico, Central America and the Orient, many of them unable to speak English. 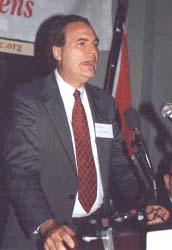 The panel chairman and opening speaker was Atlanta attorney Sam Dickson. “Those of us who believe in a White European America must confront some lies,” said Dickson. He went on to skewer some of the common lies that float around the immigration debate. The first lie, said Dickson, is “America is a nation of immigrants.” It is not. Most Americans are native born. The second lie, Dickson explained to the July 10 meeting is “Diversity is our strength.” There ought to be a bumper sticker, the distinguished lawyer told the crowd of 200, that says: “Diversity is strength. Say it until you believe it!” Quite the opposite is true. “Diversity is not strength; it is weakness.” Dickson cited Northern Ireland and Sri Lanka. “There diversity is not a source of strength but a source of hardships,” he said. “If this country goes on fostering every group but the founding group, you’ll have to look to Bosnia-Hercegovina for the future, and it’s not a pretty one,” he warned. Some will say that Americans are different, that “we’re nice and it won’t happen here. We’re not different and we’re not going to repeal the lessons of history,” he insisted. The third lie, said Dickson, is that multiculturalism leads to a greater and grander culture. Again, this is untrue. “Great cultures,” Dickson explained, ” are the results of small localities.” Cohesive, exclusionist societies, like Periclean Athens, Renaissance Florence, or Shakespeare’s Elizabethan England produce great cultures, the much-travelled attorney explained. The fourth lie is that opposition to multiculturalism is racism. “This lie is a club invented by the liberals to conduct intellectual terrorism and to prevent debate,” Dickson charged. “What we’re experiencing in Dade County [Florida] and other places around the country is ethnic cleansing not multiculturalism,” he argued. It is replacement of Anglo-Americans by Hispanics. This displacement of an existing population is genocide, as defined by the UN Genocide Treaty. In fact, said Dickson, “multiculturalism, as practised in America, is racist!”

The fifth lie, said Dickson, is that those imposing the immigration flood and multicultural agenda are morally superior. “Actually,” Dickson countered, “:they are not nice people. We know this: they certainly don’t practise what they preach. The Kennedys don’t practise multiculturalism in Palm Beach or Hyannisport.” Multiculturalism and the effects of massive Third World immigration are to apply to middle and working-class Americans. “This elite that governs us,” said Dickson, “lives outside the rules they impose on us. “All below them are equal. The elite lives outside the rules. They live in almost exclusively White communities and send their kids to mostly all-White schools. You could not find a French aristocrat who behaved with more contempt for the people than these multicultural liberals.” The final lie, said Dickson, is “It’s inevitable:” that the rapid transformation of America into a Third World nation is in the cards and cannot be avoided. “On the contrary,” said Dickson, “we have a wealth of talent in our race. We’ve produced outstanding scientists and artists.” If tiny Latvia, its population diluted almost in half during the 50 year Russian/Soviet occupation can regain its independence, why can’t we with 170-million people of European descent and still the Majority? As a message of hope, he added: “ur race has done improbable things over and over again.” In his conclusion, Dickson emphasized?: “All is not lost!” 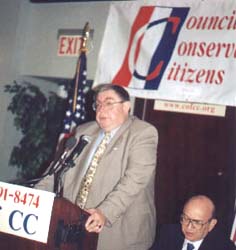 Dickson then introduced syndicated columnist Dr. Samuel Francis. “He’s the leading strategist of our cause. He was fired from his job at the Washington Times for his support for our people.” “Immigration is not the only thing driving multiculturalism,” Francis explained. “Many of think multiculturalism is just an add-on to Western culture.” Some think that if people from Latin America wish to celebrate Cinco de Mayo Day, as Irishmen celebrate St. Patrick’s Day, then just let them have it. “This is really a very inadequate concept of multiculturalism.” In fact, insisted Dr. Francis, “multiculturalism is really a demand for the destruction of our culture, of our race. It’s a question of which culture is going to be dominant. The whole point of multiculturalism is get rid of our culture and enthrone theirs. It is a power struggle to overthrow the hegemony of one race (ours) and replace it with another (theirs),” he said. 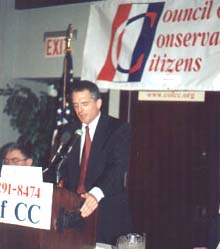 Jared Taylor, a Yale graduate and translator of Japanese, is the author of Paved With Good Intentions: The Failure of Race Relations in Contemporary America. He is also the founder and editor of the monthly newsletter American Renaissance. Taylor insisted: “Multiculturalism puts more and more constraints on our discussion and twists the noose tighter and tighter around what we can say.” He gave the example of the fate of a recent study commissioned by American Renaissance. Called The Colour of Crime. The study found that of 1.7-million crimes between the races in America, a shocking 90 per cent were committed by Blacks against Whites. Furthermore, despite all the media frenzy about skinheads and former members of the World Church of the Creator, Blacks are twice as likely as Whites to commit a “hate crime.” “All of this,” argued Taylor, “is relevant to the current controversy over racial profiling. Police departments, instead of saying, ‘Of course, we do it,’ deny it. They’d be fools not to do it, just as we know that young people and males are more likely to commit crimes than older people and females.” “When this report was to be released in June,” Taylor recounted, “we had advance interest from a number of media outlets, like Time, NBC News, and the Washington Post and others. They were eager to receive advance copies of this time-embargoed report. Yet, when we had our press conference, they totally ignored us. Not a word appeared.” Later, the conservative Washington Times did run a substantial part of the report. Taylor has since discussed the controversial report on over 40 radio interviews and talk shows However, said Taylor, “if the findings had been reversed, if we had found that Whites were twice as likely as Blacks to commit a crime, there’d have been great publicity.” Taylor gave another example of media bias. In 1998, a project called Violence Free Duluth, decided to study every gun-related crime in that Minnesota city and examine all factors, including the sex and race of the victim and perpetrators, as well as the relationship, if any, between these two parties. In April, 1999, they released their report but did not make public the statistics about race.. Frank Jewel, the director of the organization, said: “We did not include it because it might have been misinterpreted.” In truth, said Taylor, “he’s saying the people of Duluth are stupid and won’t interpret the crime statistics right. Even worse, the deputy police chief of Duluth remarked that, if minorities are heavily involved in gun crimes, it would let Whites park their prejudices. ‘We want to concentrate on gun control.'” “In fact, argued Taylor, it might we be that Duluth does not have a gun control problem, but a minority problem.” “In our own case, we saw a totally unscientific approach to suppress data that was inconvenient. Weren’t those media, like the Washington Post, saying, ‘We’re smarter than those rubes out there’?” In its July 7, 1999 issue the New York Times front page asserted “no one knows” to the mystery of why Blacks consistently do worse in IQ scores than Whites. Even poor Whites do better than rich Blacks. Taylor explained: “The author asks why and then says, ‘No one knows.’ However, Arthur Jensen knew 30 years ago; Phil Rushton of the University of Western Ontario knows today.” ‘Multiculturalism leads to the suppression of information,” Taylor charged. “An ignorant people is easier to govern.” Taylor praised former British Prime Minister Lady Thatcher for a recent comment about the U.S. in which she said that the Utopia of multiculturalism involves a bureaucratic class distributing wealth among groups and looking increasingly like the Soviet Union and equally doomed to fail. Taylor concluded with a stirring reading of Rudyard Kipling’s poem The Stranger, which celebrates the joys of kinship and a homogeneous society. He warned, as did Kipling, of “the bitter bread and wine” produced by a multicultural society.