U.S Immigration Policy Means Ethnic Cleansing of Euro-Americans, CoCC Meeting Told The opening session of the semi-annual meeting of the Council of Conservative Citizens addressed the topic: Immigration — Is the Debate Over? In the US, unlike Absurdistan (Canada), immigration is still a legitimate concern. The CoCC debate enjoyed live covereage over C-SPAN. Despite establishment efforts to all but declare the debate over, the panelists made it clear that Euro-America will not quietly accept its fate. Speakers emphasized that current immigration trends are nothing more than an invasion and the results will be not the joys of diversity, but the ethnic cleansing of the founding European people. 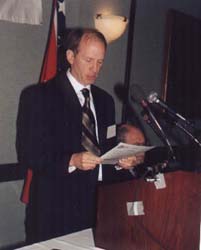 John Vinson of the American Immigration Control Foundation insisted that far from being over, the immigration debate has never really begun. He explained that 1.2-million immigrants, legal and illegal flood into the U.S. annually. “Within 50 years, demographics will shift and Europeans will be a minority and culture will shift in the U.S. toward the Third World.” There are already dark shadows of what is to come. Vinson cited the case of Mario Obledo, a California Hispanic leader who professes to be concerned about racism. Yet, Obledo has said: “California is going to be a Hispanic state and anyone who doesn’t like it should leave.” How can this be happening, Vinson wondered. “Greed and treason are the reason. America’s elites don’t want any barriers to their profit making and don’t want to pay the American worker a decent wage.” An example of this greed elite, said Vinson, “is George Soros, a passionate advocate of immigration. His Emma Lazarus Foundation gives money to pro-immigration groups.” Soros has been linked to massive currency speculation which has destabilized the economies of several Asian states. ` “They call us Nazis,” said Vinson, but it is the pro-immigration lobby “who see immigration as their final solution.”

What is happening, argued Vinson, is that the rule of law is being confronted by the Third World’s philopsophy that might makes right and elites rule,when might makes right. Then, when there are no legal barriers, all men beneath them are “equal” he said Concluding, Vinson told the meeting of 200 activists in Fairfax, Virginia: “We have to get over the idea that all cultures are equal. People came here to America because they see our culture is better.” The second panelist was Virginia Abernethy, professor emeritus at Vanderbilt University. “Our own poor people, including minorities, are hurt first and worst by immigration,” she said. “The charge that we’re racist is ludicrous.” 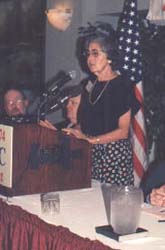 Professor Abernethy focused on the demographic and financial impacts of massive Third World immigration. “The foreign born are 10 per cent of the population,” she said, “but 18 per cent of the births. We’ve been propelled into a birthrate that’s approaching that of the Third World..” One per cent population growth per year means we’ll double our population inside 70 years, she warned. “By 2050, we’ll be half a billion.” “Population growth leads to serious environmental impacts, environmental degradation and higher taxes,” she cautioned. Following the pattern of many Third World countries, America is seeing a widening gap between a rich elite and the rest of the population.

Citing a recent study by Dr. Donald Huddle, Professor Emeritus of Economics at Rice University, warned: “The nearly 26-million legal and illegal immigrants settling in the United States since 1970 cost the taxpayers a net $69-billion in 1997 alone, in excess of taxes those immigrants paid.” Most of this burden falls on local taxpayers, she explained, particularly in the area of education. For instance, in California, just to keep up with the soaring population, “the state must build one new school a day!” Abernethy, who is a member of the national board of directors of the Washington-based Carrying Capacity Network, said: “Blacks and Whites are fleeing California. Therefore, California’s real population growth is more than 100 per cent immigrant driven.” There are hefty capital expenditures needed to accommodate this new growth, especially schools and roads. “Each new person costs a community $15,000 in capital investment.” She pointed to the fact that, on average, taxes in larger communities are 25 per cent higher than in smaller communities.

As for the alleged economic benefits of immigration, most of the GNP generated by the newcomers goes to the immigrants themselves as wages. The competition for jobs caused by immigration drives down wages, Dr. Abernethy said. “Immigration is costing wage earners $33-billion per year in lost wages. That goes into the pockets of the employers. It’s destroying our middle and working class,” she charged.

The Huddle report found that during 1996, approximately 2.3-million predominantly low-skill American workers were displaced from their jobs due to the continued heavy influx of immigrant workers since 1970. That cost taxpayers, who paid more than $15.2-billion in public assistance for those displaced. Dr. Abernethy echoed John Vinson in warning of “a growing disparity between rich and poor not seen since the Great Depression.” The more people there are the more pressure there is on the environment, she warned. The topsoil in the U.S. is being destroyed 18 per cent faster than it can be replaced. “We’re doing this to export food.

At some point, our soil will be depleted and we won’t be able to feed ourselves,” she cautioned. “At the Carrying Capacity Network, we advocate a moratorium on immigration of 100,000 per year,” Prof. Abernethy said. “This is what polls show the American people want.” We’ll pay a terrible price to cater to the elite employers who want a nanny and a gardener cheap, she concluded. 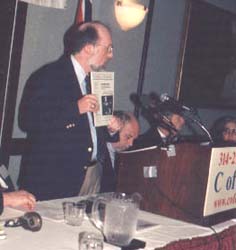 Dr. Wayne Lutton, editor of the Social Contract journal, warned: “If President Clinton and his cronies have their way, we’ll have a very dark future indeed.” “We really haven’t had a debate on immigration in America. One reason is that at no time has there ever been a general demand for more immigration,” Lutton argued. Doris Meisner, the head of President Clinton’s Immigration Service chortled: “We’re transforming ourselves,” as immigration lawyers cheered. “What she should have said,” insisted Dr. Lutton, “is ‘we’re transforming and deconstructing you!'” Did the politicians ever ask Americans: “Are your taxes too low? Is your air too clean? Do your children have enough playmates to play with? Are your roads too uncongested?” The 1924 Immigration Act signed by President Coolidge was a rational response to the Balkanization which touched off World War I, Dr. Lutton argued.

President Coolidge very naturally tried to head off the ethnic conflicts that had plagued Europe. Early immigration programmes hoped to avoid a similar fate by placing the emphasis on selecting those “likely” to assimilate, he explained. The 1924 Immigration Act, former college instructor Lutton explained, “limited immigration to 150,000 per year and tried to attract people similar to those here and, therefore, people who could be easily assimilated.” The 1965 Immigration Act changed all that.

The 1986 amnesty for illegals and the 1990 Act, which actually increased the number of immigrants annually even more, succeeded in increasingly immigration from 150,000 per year, mostly from Europe, to over 1.2-million per year, with 70 per cent of these being from backgrounds dissimilar to those of the founders of America.This has led to the family-driven chain-immigration that we have seen over the past 30 years “The INS admits there are about 300,000 illegals annually in addition to the 1.2-million legal immigrants,” Dr. Lutton said. “Immigration is not a single issue,” Dr. Lutton explained. “There’s an immigration impact on many other issues. We must help Americans see these links.” He mentioned such problems as crime, environmental degradation and the deterioration in education. Recently, 29 per cent of adults surveyed in a Wall Street Journal poll said reducing immigration was their number one issue. More Americans, he explained, chose such issues as reducing crime, improving education and preventing U.S. jobs from going overseas. “The point is,” Lutton stressed, “is that all these issues have an immigration component.

For instance, at any given time, 30 per cent of the prison population is foreign born and the drug trade is largely controlled by immigrants.” As for welfare, he noted, recent immigrants have a far higher rate of welfare usage than do native-born Americans. Even if they have jobs, they’re usually poor-paying jobs. “Therefore,” Dr. Lutton emphasized, “these immigrants will be a drain on our social services especially in their later years.” “If we want to reduce crime, lower taxes and help the environment, we must reduce immigration. It will have an immediate impact,” Dr. Lutton stressed. Mokita is a word used by Pacific Islanders, Dr. Lutton said. “It means ‘what everybody knows, but dares not say. We must say it: 60 to 70 per cent of adult Americans agree. America is not just a geographical entity. It is a nation with certain values.” “I’d go beyond the proposal of a zero immigration moratorium and say we should begin deportation. Deportation now!” Dr. Lutton concluded to thunderous applause. 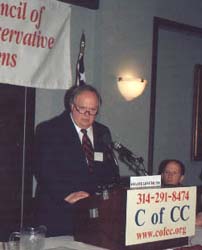 Californian Glen Spencer, head of Voices of Citizens Together, said: “it’s often said that California is America’s future. Let me tell you about your future. Los Angeles schools have sunk to the 20th percentile. There’s a 50 per cent dropout rate. Many graduates can’t read. People are fleeing the system.. This is your future,” thanks to immigration, he warned. Don’t fool yourselves, he cautioned his activist audience.

The problem will not be “contained” in California, Already, in the heartland, in Iowa, 90 per cent of domestic crime is associated with Mexicans, while, in Salt Lake City, in Mormon Utah, 80 per cent of drugs arrests are “illegals. In 1998, Democrat Ray Davis was elected Governor of California. “Republic Dan Lungren lost the election because he refused to talk about immigration. Why would neither candidate talk about immigration in a state facing traffic gridlock, environmental meltdown and education disaster?” Spencer demanded. Lungren had no credibility, Spencer charged. During 8 years in Congress on the Immigration Committee, he helped other Republicans to grant amnesty to 3-million illegals.” Therefore,” concluded Spencer, “he couldn’t talk on immigration” reform. He could have told voters about Art Torres, the Chairman of the Democratic Party in California who said Proposition 187 “was the last gasp of White America in California.” Spencer insisted that Torres has as much as stated that, when Mexicans take over, they’ll discriminate against White Californians. Panelist and national newspaper columnist San Francis has said:” Former Rep. Robert Dornan, who opposed illegal but supported legal immigration, commented in 1996: ‘I want to see America stay a nation of immigrants. … If we lose our Northern European stock, your colouring and mine, blue eyes and fair hair — tough! Soon after his statement, Mr. Dornan lost his seat to a Democratic rival who emphasized her Hispanic identity.” The self-denigrating Dornan lost not only to the immigrant vote he welcomed, but, ironically, to widespread voter fraud perpetrated by many of these very immigrants Latino legislators in California are now pushing for the issuing of driver’s licences to illegals, Spencer revealed.