At 7:30 p.m. on August 18, two Asian men in a red car pulled up at a red light in Edmonton alongside a black vehicle containing four Asian males. The road bordered Telus Field, where a baseball game was just starting between the hometown Trappers and the Calgary Cannons. Heated words were exchanged between the occupants of both autombiles. Suddenly someone in the red car pulled out a handgun and fired five shots at the black car. Two stray bullets struck a nearby taxi carrying two women passengers but neither was hurt. The other three shots hit the driver of the black car, Hai Van Tran. 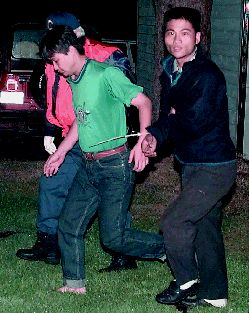 Tran, 18, faced charges in connection with the hatchet murder of Dominic Mah at West Edmonton Mall on Boxing Day, 1996. Now he slowly bled to death on the pavement while passerby and then paramedics worked to save him. The other occupants of the black car were unhurt. Then witnesses watched one passenger bolt, running away “faster than a rabbit.” Police captured the man a few minutes later and quickly discovered why he had fled. Hung Van Bui, 18, was wanted on a Canada-wide warrant issued for the murder of a UPS delivery driver, who had been stabbed to death in broad daylight on June 15.

This type of bold violence, which police say is typical of Asian crime-gangs, is one reason why Canadians are suspicious when they see boatloads of nameless people being smuggled into their country. According to John Thompson, executive director of the Toronto-based Mackenzie Institute and an expert on organized crime, it is almost certain that most of the recent arrivals will work directly or indirectly for Asian hoodlums after they enter Canada. “That’s been the established pattern for 15 to 20 years now,” he says.

The people-smugglers, known as snakeheads, are typically members of a Triad; these secret societies, eight in number, have roots going back 350 years in Chinese history. Triads operate criminal as well as legitimate businesses on a global basis. “A family will put up one of its members to come to America and establish himself here, and then bring other members of the family over. They contact a snakehead, usually through an intermediary, and a snakehead agrees to get them into North America for a price,” Mr. Thompson says. Reports are that the boat people paid between $30,000 and $35,000 apiece.

Since the migrant usually cannot pay up front, he agrees to seek out a pre-arranged contact after arriving in North America, and the contact places him in a Triad-related business. “This could be a restaurant or a laundry,” Mr. Thompson says. The worker receives minimum wage, but his status is basically slavery because the money goes back to the Triad until the debt is paid. “Women pay off the debt in more traditional ways,” the Mackenzie Institute chief says. “They work as prostitutes in Asian brothels, of which there are many.” Young men who show particular promise will sometime be asked to join a criminal organization here, and deal drugs.

The contracts with snakeheads are almost never broken because the migrant knows that he or his family back home will be punished by the Triad, sometimes by death. “Usually the Triads don’t want them to make refugee claims,” says Mr. Thompson. “They want them as far away from the system as possible.” 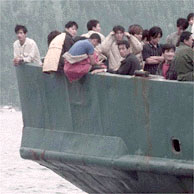 There is no direct evidence that the current lot of boat people are headed for a life of crime. However, some disturbing revelations have filtered out. The first boatload staged a protest, ostensibly over the food they were being served from a Chinese restaurant. It turned out that the protest was more over the packaging. When the restaurateur switched from styrofoam to aluminum tin, some of the migrants began fashioning knives for weapons out of the plates. When the next boatload was dumped on the Queen Charlotte Islands, some fugitives gave themselves up only after being convinced they were on an uninhabited island with no possibility of escape.

Figures show that an estimated 3% of all immigrants seek a life of crime in this country. However, the terror inflicted on the public by these bad apples is way out of proportion to their numbers. Leon Benoit, Reform’s immigration critic, says liberal-minded people often question him about why he makes such a big deal about immigrant criminals when they are relatively few in number. “My answer,” he says, “is that 3%, through drug dealing, prostitution and violence, can do an incredible amount of damage to society.”

TOO GOOD TO BE TRUE

A resounding cheer was heard across the nation August 17. Millions of Canadians opened their newspapers to read Athat 78 Chinese migrants who had somehow neglected to utter the magic word ‘refugee’ in interviews with immigration officials were to be deported faster than you can say, “What, are you _stupid_?” The next day, however, (these same immigration officials–hanging their heads in shame like Chinese politicians after a re-education session–confesed that the interviews had been “bungled’ and that no one was leaving the land of milk, honey and ESL any time soon. Those who had read an August 16 Vancouver _Province_ story were not surprised by this turn of events. Lawyer Peter Golden, one of IO representing the migrants, declared that the hapless bureaucrats had “essentially deny[ed] them the opportunity to make their claim. That’s not lawful; it’s not their role.” No, it’s the stakeholders’ role. The bureaucrats are still not listening hard enough.

THE FINEST ESL MONEY CAN BUY

The B.C. government has taken into custody 43 unaccompanied minors who landed with the second wave of boat people. Children’s Minister Lois Boone explains in the August 18 Province that “Thee need for interpreters, teachers and special care has made their welfare costly .. about $8,200 per child, per month.’ Orders of Canada be damned! The snakeheads [Chinese mafia involved in smuggling human cargo–see “The crime connection” in follow-up] deserve a special honour: Heroes of Canadian Labour. And Elinor Caplan deserves a partial apology; immigration certainly brings prosperity to some.

Whenever a politician decries “simplistic” solutions, you know he is on the wrong side of an argument. The August 16 Victoria _Times _Colonist _ reports that federal Environment Minister David Anderson rejects the assertion that “Canada’s immigration laws are lax.” Yet he insists there is little that can be done to secure the borders: “The trouble is to prevent [illegalsl from coming into Canada we would have to essentially destroy Victoria’s tourism trade … We have limits as to what we can do regarding the 20 million-plus legal visits to Canada annually.” How’s that for a stirring motto? Millions for tourism, not one cent for defence!

Mr. Anderson should consult a map. He will notice that Canada shares a border with only one country: the United States. Immigration Department bureaucrats could further inform him that illegal immigrants do not pass from the U.S. to Canada but from Canada to the U.S. Mr Anderson can then go back to his map and discover that Canada is separated from the rest of the world by the Arctic, Pacific and Atlantic Oceans. Interdiction of the seas is a task that should be within the competence of even a Liberal government. The bureaucrats could also tell Mr. Anderson that non-American tourists arrive in this country at international airports. Interdiction there would be slightly more difficult but still within the power of a government that professed to uphold national sovereigfity. Last week this column suggested that treason should be a disqualification for cabinet office. How about fatuity?