Immigration and a much-coveted ticket to someplace like Canada is the holy grail for much of the Third World. In a small village, just one successful refugee or immigrant claim can clear the decks for everyone else. So sacred a trust is not to be taken lightly – nor is it. In Kasanga village, (in the Rukwa region of Tanzania’s remote southwest) “a dog sentenced to death for having an offensive name has been executed and its owner got a suspended six month sentence.” (Toronto Sun, March 4, 1998) “Prosecutors told the court last month that the owner, John Kachela, had mischievously given the dog the name of a highly respected government department and compounded the crime by going to the department on a daily basis and boasting of its name.” (Reuters, March 9, 1998) The dog’s name was “Immigration”. There are several versions of the dog’s demise, depending on the source: the animal was variously shot by police, hanged, or bludgeoned to death by the owner. “‘It has become a disgrace to the region and the nation,’ the Daily Mail quoted senior regional officials as saying. ‘It has become of international interest with people asking questions from as far away as Britain and South Africa.'” (Reuters, March 10, 1998) 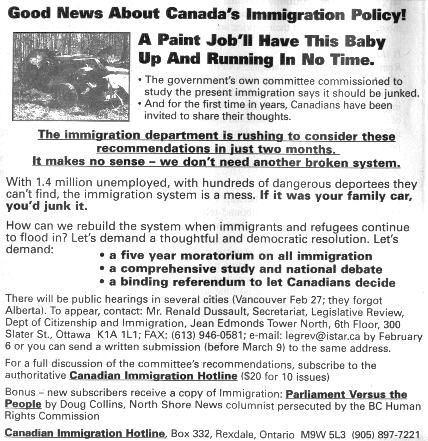 As reported last month, Canada granted asylum to the first family of 20 Gypsies, based on “their fear of persecution on the ground of race”. Now that it’s home, “Toronto’s Romani community has set up a group to fight ethnic stereotyping.” (Toronto Sun, May 21, 1998) Right at the centre of refugee claims as always, “Lawyer George Kubes said the word has spread among Gypsies in Europe that Canada is the place to be. … ‘Canada is seen abroad as accepting all the Romas.’ … Federal immigration officials are keeping a close eye on a steady stream of Hungarian Gypsies arriving here to file refugee claims. …He said the Hungarian and Romanian Gypsies, like their Czech counterparts, claim they’re persecuted in their homelands by the government and skinheads.” (Toronto Sun, May 25, 1998) Meanwhile, back in their various grindingly oppressive homelands: Czech President Vaclav Havel, has pardoned two Roma men charged with roughing up far-right leader, Miroslav Sladek. In Romania, the education minister, “Andrei Marga said he ‘would introduce a mechanism of positive discrimination favouring Roma in state education … in schools, professional schools and higher education institutes.” (AP, April 18, 1998) It’s the same mindless persecution where “Two Czech cities have decided to fence in what they call ‘problematic’ public housing residents, mainly Gypsies, who officials say ruin the calm, orderly life of their neighbours. … A neighbour … showed a reporter a videotape he had made of the Maticni housing project in March. The yard and the street were littered with trash and a pile of garbage about a meter high and several meters long lay next to an abandoned apartment block. The street’s Romany residents blame the city for their problems. … Asked if fencing the Gypsies into what is effectively a ghetto might be a violation of their civil rights, [the Mayor] erupted in anger. ‘Rights? Are you serious? What civil rights?’ he said. ‘They can vote, but they don’t. They can work, but they don’t. They can pay rent, but they don’t.'” (International Herald Tribune, May 25, 1998)

The Face of Canada is Changing, Census Finds

Statscan has confirmed what most Canadians have already realized — massive immigration since 1965, heavily favouring non-traditional or Third World sources, is changing the face of Canada. This trend, never approved by Canadians, has nearly doubled the number of Third World people here in a decade from 6.3 per cent of the population in 1986 to 11.2 per cent in 1996. Should this rate continue (the Third World proportion doubling every decade) , Canada could be 50 per cent non-White by 2020! The Statscan report 1996 Census: Ethnic Origin, Visible Minorities, released February 17, 1998 reports: “Since the 1970s, sources of immigration to Canada have changed greatly, with many more immigrants coming from non-European countries. Over half the immigrant population who arrived since the 1970s, and three-quarters of those who came in the 1990s, are members of a visible minority group.” In 1996, Canada was home to 3.2 million persons who identified themselves as members of a visible minority. They represented 11.2% of the total population in Canada, up from 9.4% in 1991 and 6.3% in 1986. The Census showed that about three out of every 10 individuals who identified as a visible minority were born in Canada, and the rest were immigrants.

While Ontario and British Columbia contained half of Canada’s total population, they accounted for almost three-quarters of the visible minority population. The proportion of visible minorities varied considerably from less than 1% of the population of Newfoundland to highs of 18% in British Columbia, and 16% in Ontario. The proportion was below the national average of 11% in all of the other provinces and territories.

Here’s one we won! “A Hispanic gang member who stabbed a rival in a schoolyard fight has been ordered deported from Canada to his native Philippines. Juan Balmores Pablo, 21, was ordered ejected by an Immigration and Refugee Board yesterday because of his 1996 conviction of aggravated assault. He was jailed 131/2 months. Pablo came to Canada in 1994 and broke the law within two years, the board said. Court heard he was a member of the Lafamilia gang, which was feuding with a rival group, the Latino Browns. In June 1995, police said, a car carrying 12 Lafamilia members drove to Cardinal Newman School on Kingston Rd. in search of a rival gang member. Police testified the Lafamilia gang pounced on the 20-year-old victim and beat him with bars and clubs. He was also stabbed and slashed six times on his head and upper torso. Several gang members were arrested five hours later outside a movie theatre. Pablo admitted to the immigration board that he had stabbed the man twice with a six-inch knife. ‘Mr. Pablo’s offence was serious’ and he continues to pose a risk in Canada, the Immigration and Refugee Board decided.” (Toronto Sun, May 8, 1998)

Solicitor General, Andy Scott says “Law enforcement agencies are about to crack down on Canadian organizations that are fronts for foreign terrorists. … Scott recently tabled an intelligence report that concluded Canada has become a haven for every known terrorist group in the world. Most terrorists not only have a presence in Canada but they use Canada to raise funds as well as providing logistical support and safe havens, he said. … He won’t tolerate terrorist groups masquerading as charitable or humanitarian agencies.” (Toronto Sun, May 25, 1998) “We may be about to grant political asylum to at least eight ‘refugees’ now in an Israeli jail, including two Iranians, one of them a hijacker, four suspected Iraqi spies and two Syrian defectors. …

According to the lawyer for the Iraqis, ‘No other country would accept them.'” (Toronto Sun, May 21, 1998) Was this arrangement by any chance, brokered by hard-nosed Canadian negotiators last year? “Look, this isn’t the first time you’ve used our passports for these nefarious purposes. The dignity of the Canadian people cannot be restored with less than eight expellees.”

(Or was that Cuba?) Premier Mike Harris suggested that, rather than simply shipping criminals to Canada, “Each country should cope with its own problems … ‘We seem to have a disproportionate share of those who are problems. And I think it’s time the government took a little more balanced look at that,’ he said.” (Toronto Sun, May 21, 1998) Canadians have long-suspected that we are get “remittance men” (of course, we also “get” to pay their remittance). “The father of a Sri Lankan who tried to rape a seven-year-old girl was told by a judge to find his son a bride without delay, a report said yesterday. ‘Find a partner for your son soon, or send him abroad. He will not get off lightly if he does this again,’ the Sinhala-language Divaina newspaper quoted magistrate Ranasinghe as saying.” (South China Morning Post, February 14, 1998)

“RCMP laid more than 100 charges Tuesday against a Taiwanese fund promoter, a Hong Kong businessman and a now-defunct Calgary recycling company after uncovering alleged violations with a $ 7-million immigrant investment fund. … RCMP allege [Larry] Lee, [Charles] Lam and Toby Manufacturing Inc. took part in an elaborate kick-back scheme over a six-year period, funnelling millions of dollars back to Taiwan through several other Calgary-based companies owned by Lam and his family and leaving only a small percentage in the fund.

Lee, 47, is living in Taiwan while Lam, 69, is believed to be in Hong Kong. … None of the fund’s 25 foreign investors, who gained Canadian visas by investing $250,000 in the Toby fund, will face charges, said RCMP Const. George Koszegi. [Strangely] … it is not known how many have taken up permanent residency in Canada.” (Canadian Press, May 13, 1998)
See our Immigration Books section You can reach the Canada first Immigration Reform Committee at: