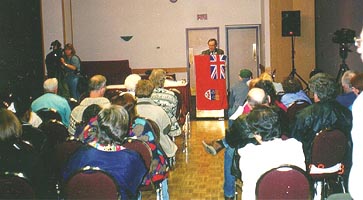 The immigration lobby is adopting a new tactic. It is trying to cancel meetings of immigration reformers through protests and threats directed at meeting halls and, then, planned disruptions, should the meeting occur..

Attack on Freedom of Speech, in Victoria. 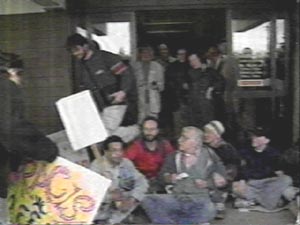 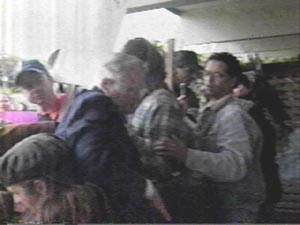 [Left] Communist and International Socialists block the door to the library
[Right] 78 year old war hero Doug Collins has to fight his way through a sea of communist stooges.
On September 10, Victoria lawyer Douglas Christie was to speak at a Western Canada Concept meeting at a Victoria library on the topic of immigration reform, particularly the urgent action needed to handle the recent invasion by more than 600 Fukienese illegals. A coalition of leftist, communist, and multicult groups, including the Trotskyists International Socialists unsuccessfully pressured the library to cancel the event and then showed up in a nosiy, jostling demonstration to try to turn people away. The meeting of 40 people was held as scheduled.

Similar efforts were used to try to halt a public meeting — a rally and protest against the Chinese illegals — to be held, Wednesday, September 29, in Prince George British Columbia. 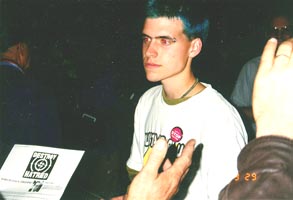 True to the threats, a motely assortment of multicultis, “diverse” in hue, attended the meeting. Most sneaked in or refused to pay the $5.00 offering requested. Several Anti-Racist Action (ARA) slander sheets about CFIRC Director Paul Fromm were circulated by a gaunt youth with blue hair and enough studs and pins in his face to blow out an airport metal detector. The AMSSA FAX had warned of “undesirable groups” being attracted to CFIRC meetings. The ARA with its long history of smashing meetings and terrorist violence — it has been identified by the Canadian Security Intelligence Service as having perpetrated the firebombing of Toronto publisher Ernst Zundel’s home in 1995 — was the only “undesirable group” present and it came to protest.

Outside the hall, a hefty female told people entering the hotel that she had lived in Ontario and knew all about Paul Fromm. She said he’d founded the Western Guard . [false] The second person she handed her leaflet to urging him not to attend the meeting was Paul Fromm! 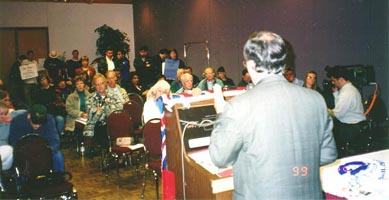 Once inside the multicultis tried to shout Mr. Fromm down. One leather-lunged man insisted that he explain about the Western Guard. Others hooted about racism and Nazis. “Racism” and “Nazi” are useful diversionary devices employed by the immigration lobby to divert attention from their lack of real arguments.

Paul Fromm, an experienced platform speaker, used good natured humour and the odd rhetorical jab, to handle the disruptions which became less frequent as the evening wore on. The majority of the audience of 70 were concerned members of the Prince George public interested in genuine immigration reform. They became increasingly assertive in telling the protesters to mind their manners, wait for the question period, and keep quiet so that they could hear the advertised speaker.

The meeting was extensively covered in the B.C. and local press, with front press notice in the Prince George Citizen, CBC, BCTV, and Prince George This Week. 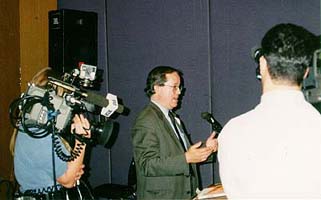 Fromm warned of the welfare costs of those illegals dumped on to the already burdened backs of the B.C. taxpayers. “Why,” he asked,”is a Canadian child worth $720 a month on welfare, while an illegal youth who has sneaked into this country is worth $8,200 a month? What makes an illegal kid worth 12 times what a poor Canadian child is worth?” No one in the immigration lobby had an answer to this question. So, the bull moose disruptor started braying about “Nazis.”

Most in the audience were clearly unmoved by the personal defamation heaped on the speaker, mostly in anonymous smear sheets, or by the rude behaviour of some of the multicultis. A majority of the audience signed the CFIRC petition calling on the government to invoke the “notwithstanding” clause and require all potential immigrants or refugees to apply from and be vetted abroad.